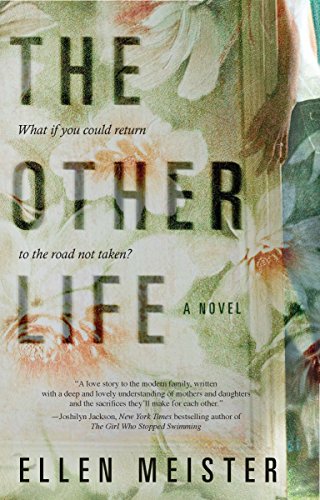 How many wonder what their life would be like if they chose a different path? This is the crux of Ellen Meister’s riveting novel, The Other Life.

Before Quinn Braverman was born, she experienced a trauma that followed her throughout her life. As she grew, she knew she could see herself in two different realities, an ability or “power” that deeply frightened her mother, Nan Gilbert, an up-and-coming artist who battled a bipolar disorder most of her life. Because of this trauma Quinn suffered in utero, she is able to cross over from one life to the other.

The prologue commences with Nan on the verge of suicide, even though very pregnant and almost at term for delivery. Segueing into the life of daughter Quinn, now 36 years old, we find her married to Lewis Braverman and the mother of six-year-old Isaac. Though Quinn loves her life and her family exponentially, she grieves the loss of her mother, whose suicide attempt was finally successful just before Isaac’s birth.

Deep inside, Quinn feels responsible for her mother’s death, believing Nan had been upset with her because of the life path she chose. She had not chosen to marry Eugene, a narcissistic, obsessive man on his way to stardom—whom Nan adored—and after a ten-year relationship with him, Quinn felt smothered by his neediness and selfishness. Though Lewis is everything Quinn wants in a life partner, Quinn believed her mother thought she sold out to marry an ordinary man, live in the suburbs, and raise a family.

When Quinn becomes pregnant with her second child, she learns her baby has a serious deformity. Needing her mother’s comfort and advice, Quinn decides to access her old life . . . the life she would have lived had she remained with Eugene—a life where her mother was still alive.

As pressure mounts with the decisions she must make about the baby she carries, Quinn finds herself more and more attracted to the life she once knew. Though that life had been fraught by Eugene’s demanding and smothering ways, she wonders if she would be better off with him rather than Lewis and Isaac. Which life should she choose?

This inimitable tale is mesmerizing with the twists, turns, and angst Quinn deals with at the loss of her beloved mother and the upcoming birth of her child. The author flips from Quinn’s to Nan’s point of view, though this is executed flawlessly so does not confuse or slow the plot. The depictions of emotions of pain and torment as well as blissful happiness are heartfelt and highly plausible—and the cliffhanger ending is sure to surprise.