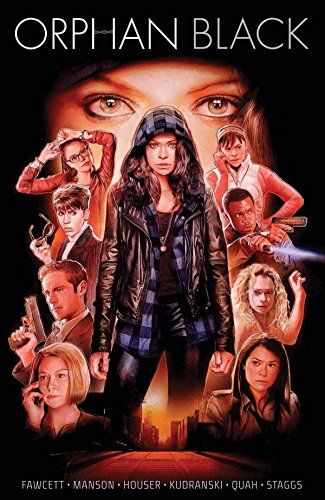 Compiling the first five issues of the Orphan Black comic book series, Orphan Black: Volume 1 is in essence a rehashing of the events in the first season of the TV show the comic books are based on. So for fans of that TV show, the graphic novel won’t really give them any new information, insight, or entertainment they haven’t already experienced. It divides the narrative amongst the clones, with each chapter/issue about either Sarah, Allison, Helena, Cosima, or Rachel.

For readers not familiar with the TV show, the graphic novel will explain the premise of the clones that have all come to find out about each other and the secret scientific project being conducted by Dyad Corporation to study them. Unfortunately, because of the way the narrative is split up between the clones, this information comes way late in the story and most likely will mean readers will be highly confused for the first few dozen pages.

That isn’t the only confusing part of this graphic novel. Information crucial to understanding what is going on, information that is available in the TV show, is not available in the graphic novel. The sequence of panels is jarring, confusing, and downright neglectful. Those that have watched the TV show will be able to keep up, but heaven help anyone reading this who has no idea what it is about because they aren’t going to get much help.

The other major critical flaw in the graphic novel is that the art wavers between photorealism and lazy minimalism. At times it’s easy to tell the clones from the supporting non-clone characters and sometimes it is not. Many of the female characters all look alike with the same plain features and blank looks on their faces even when they should not look anything alike.

The many characters that swirl around the lives of the clones are half the fun of the TV show. They have all basically been stripped from the storyline and given a couple panels here and a couple panels there. It’s as if the writers said, “Hey, we have clones! Bad stuff happens to the clones! Exciting, right? Yes, it is! No need to have those other characters do anything interesting at all because you’re here to see the clones!”

In short, the graphic novel comes off as a blatant attempt to capitalize on the success of the TV show without providing any of the depth or entertainment viewers have come to expect. It is a plodding rehash of a story that is a million times better in the format it was originally intended and really didn’t need to be made into comic book form. For collectors and diehard fans, this graphic novel would probably fit nicely in their collection. For others, it is worth moving past and spending the time saved enjoying the hundreds of far worthier works out there.