Originals: How Non-Conformists Move the World 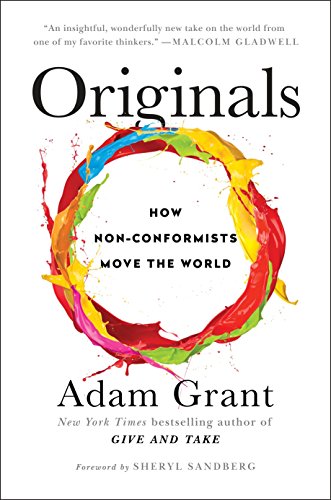 “an interesting and thought-provoking read.”

E. B. White said, “I arise in the morning torn between a desire to improve the world and a desire to enjoy the world.”

There are hundreds of books written about creativity, innovation, thinking outside the proverbial box, and developing unique skills to make one stand out.

And therein lies the heart of Originals: How Non-Conformists Move the World by Adam Grant. The author questions behaviors and beliefs. He challenges the status quo and provides examples of people who buck the system and create new and interesting products, methods, and models.

When asked who is the most influential original on the planet, Adam Grant, responded, “I’d put my money on J. K. Rowling. She rejected the norms of writing short children’s books . . . Her work affects readers when they are young and impressionable . . . and reading Harry Potter in particular reduces prejudice. That ain’t half bad for a Muggle.”

Grant opines that everyone can become more “original” by generating more ideas. That seems to be a less than original concept. Grant writes that people need to consider possibilities and that practice can result in resolutions to problems. Grant advocates that people “rule out the obvious to discover something new.”

Business and government seem to be in a constant flux trying to figure out the best way to do a better job for customers and constituents. There is a plethora of theories on the preferred methods to accomplish those goals. It boils down to whether the people involved in the process can see past the status quo and use their imagination to create a more robust process. The Originals reflects on the actions taken by numerous people and businesses and evaluates how they incorporated ideas and creativity into achieving success.

The book includes numerous stories about various people and their successes and failures that resulted from original ideas. The author offers the theory that failure can be just as beneficial as success. In fact, fear of failure may cause individuals and companies to refrain from taking risks necessary to move forward.

Chapter 5 is one of the most fascinating chapters in the book. Goldilocks and the Trojan Horse: Creating and Maintaining Coalitions, starts with the story of Lucy Stone and women’s suffrage. There are three women to whom the suffrage movement and feminism owes considerable credit: Lucy Stone, Susan B. Anthony, and Elizabeth Cady Stanton. Yet Anthony and Stanton severed their collaboration with Stone and became bitter rivals. The reason? Stone supported the Fifteenth Amendment—granting voting rights to African American men; Stanton and Anthony believed that no minority group should be given the franchise unless and until women were given the right to vote. While their common goal was the same: women’s suffrage, these women differed on strategies needed to accomplish that goal.

There are many examples of women using unconventional means to attain success throughout the book. The premise is that women tend to be discounted when proposing solutions especially when (the men) do not see a problem. In order to succeed, women must be more clever, creative, and innovative or risk being overlooked.

Meredith Perry does not like cords—telephone cords, computer cords—she wants to be wireless. She decides that ultrasound could be converted into wireless power. She sees potential; she sees freedom from the plug. Her physics professors, however, believe it is impossible. Meredith Perry decides to stop telling people what she is trying to do and just provide the technological specifications. From there, she proves her idea is possible—it just had never been considered before. Her company, Ubeam (ubeam.com) is up and running.

Grant posits that “originals must become tempered radicals” if they want to succeed. “They believe in values that depart from traditions and ideas that go against the grain, yet they learn to tone down their radicalism by presenting their beliefs and ideas in ways that are less shocking and more appealing to mainstream audiences.” Using the example of women’s suffrage, Grant states that “coalitions often fall apart when people refuse to moderate their radicalism.”

Adam Grant offers a book that prompts the reader to muse about what might be if chances are taken and belief is suspended. It is not a fanciful book. The examples that wind their way through the book are intriguing and prompt one to pause and consider. The concept that it is necessary to “think outside the box” is not new. Grant, however, proffers the idea that one does not need to be eccentric or idiosyncratic to be an original. One need only consider possibilities after identifying the problem.

Grant cites the investment firm of Bridgewater Associates as an example of how this works. Its founder, Ray Dalio, demands and expects honest feedback from his employees. Dalio bases his philosophy on over 200 principles that he wrote. The company succeeds because it promotes the expression of original ideas. Employees are “expected to voice concerns and critiques directly to each other” and that includes Dalio himself.

All told, Originals is an interesting and thought-provoking read. The author introduces readers to original thinkers that may not be on anyone’s radar. How those individuals used original approaches to problems is a significant part of the book’s appeal.