The Org: The Underlying Logic of the Office 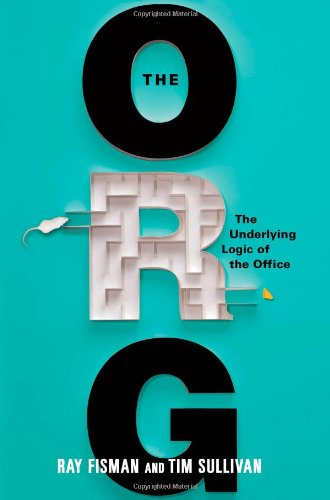 Have you ever had a really great meal, yet the next day when someone asks you what you had, you can’t remember? And worse, you really aren’t sure why you even enjoyed the evening.

For some readers this is exactly what might happen when they read The Org: The Underlying Logic of the Office by Ray Fisman and Tim Sullivan, organizational economists. This book is certainly readable. Still, as one turns page after page, is the authors’ message is somewhat buried.

According to the Mr. Fisman and Mr. Sullivan, we are working longer hours than in the past—in part due to our virtual 24/7 connectivity—but paradoxically produce no more. They ask whether we stopped questioning whether this is due to managers’ inability to communicate real, understandable objectives to employees.

In gauging this lack of communication and resulting frustration, the authors broadly refer to targets, goals, milestones or anything else that can be established and measured to determine if the org successfully completes the required work or project.

There is, however, a circular flaw in the book’s discussion of productivity. If managers can’t communicate an org’s objectives how can these be achieved, much less measured? As such, management by objective—a term first popularized in Peter Drucker’s 1954 book, The Practice of Management—is not possible. Yet according to The Org this is what managers are practicing.

Because the authors regard the typical org as dysfunctional, overburdened with superfluous data, rote behavior, endless memos, and useless meetings, they assert that change must come if productivity is to be optimized. The Org: The Underlying Logic of the Office proposes a “description of how and why orgs do what they do—how the parts fit together, how the rules get made, and what happens when you change the rules or move things around.”

The Org is an anecdote-heavy book that examines Hewlett Packard from inception, through its ups and downs, to its current troubled state; , and a number of other comprehensive and insightful case studies: Scott Urban leading a “monkish existence” running Urban Spectacles to preserve his desire for a one-man firm; the Baltimore City Police Department; Google; and the Methodist Church among others.

So how will the change from dysfunctional to optimized org, be accomplished? The authors profess “we aim to explain the inner workings of the org, drawing on the tools of organizational economics” and “organizational economics builds mathematical models to try to make sense of why orgs look the way they do, how they function, and how they might improve . . .”

The Org frequently reiterates a few key points: 1) you get what you pay for; 2) tradeoffs are part of the game; and 3) organizational economics asserts that this highly imperfect system, like democracy is flawed, but is our best alternative. This echoes Winston Churchill's famous dictum: “Democracy is the worst form of government; except for all those other forms”?

A reader might then pose the question, “Why don’t we just develop a better model with all our knowledge and abilities?” Mr. Fisman and Mr. Sullivan would answer with a quote from Max Weber, a 19th century German philosopher, “The decisive reasons for the advancement of bureaucratic organization is purely technical superiority over any other form of organization.” In other words, until we can create, test and implement a better org, we are forced to accept that what we have is indeed the least-worst alternative.

The authors rely on certain fundamental economic principles in describing the behavior of orgs. Getting what one pays for is a basic building block of economics. The economic definition of value is what a willing buyer and a willing seller agree upon without undue influence.

This is related to certain other fundamentals of economics; specifically tradeoffs and choices. When one chooses and pays for “A” or “B,” one demonstrates the principle of mutual exclusivity, as when one chooses “A” one must forgo “B” and vice versa. In an organization we make these types of choices or decisions hundreds, or even thousands, of times a day.

Two lesser referenced principles examined in The Org are 4) principal-agent problem; and 5) the “make vs. buy” conundrum.

The principal-agent problem has long been discussed in corporate financial and shareholder circles to represent the ongoing and sometimes acrimonious relationship between the Board of Directors and senior management. Both want to act to best position the org, as they perceive it—even though they frequently disagree as to which actions achieve this. Sometimes this is because the goals of a corporate board and chief executive are not fully aligned. At other times they simply see the world differently.

Mr. Fisman and Mr. Sullivan, in their discussion of the ongoing debate over make versus buy, reference Nobel Prize winner Ronald Coase’s 1937 study of major U.S. orgs in his influential article “The Nature of the Firm.” “His explanation of when and why orgs outdo the efficiency of the markets was his fundamental contribution to economics.”

Coase’s study led to questions such as, when should a firm make a widget versus buying the same widget? Here, the principle of economies of scale (as we produce more the cost per unit should decrease) is considered, and offset against the principle of the point of diminishing returns (which refers to the level of production at which increases in output increase the cost per unit). The authors assert, for example, that economies of scale work in steel but not artisanal eyewear.

What is not addressed in The Org is the actual calculation for the make versus buy decision. The best formulas for this calculation include not only the direct measurable costs and benefits, but the strategic importance of the widget as well as the org’s core competencies.

The book states an overriding reality that resonates among readers who work within orgs: “The org is not a problem. It’s a solution—but one that comes with some messy realities.” This implicitly acknowledges the difference between theatrical solutions and real-world, practical ones.

The theoretical solutions frequently come from books of the self-help variety that focus on the “what” of a solution rather than the “how”. This is the “messy” or challenging part. The “how” of any solution, however, is the most difficult part. Any executive of an org that has implemented a strategic plan will agree that the execution of strategy is much more difficult than originally planned and required many adjustments along the way.

Separately, Mssrs. Fisman and Sullivan assert the following: “Th[e] flattening of the hierarchy was the result of greater autonomy given to lower-level employees . . . [I}f information is power, the spread of information technology has been empowering.” This is something for which many proponents of better organizations through communication have been clamoring.

This assertion is fully consistent with a key point in Peter Drucker’s 1999 book, Management Challenges for the 21st Century. Mr. Drucker wrote that the relationship between the corporation and employees continues to evolve. Employees can now jump ship with their intellectual capital to peruse better opportunities as they arise rather than being relative slaves to an orgs demands. Knowledge is power. Perhaps this knowledge can and should be used to improve the org rather than discourage knowledgeable employees.

The most controversial topic covered in The Org is whether chief executive officers are overpaid. The authors emphasize that this question must be looked at relative to the value they add to organizations. Mr. Fisman and Mr. Sullivan take the position that we should consider the idea that CEO pay is designed "to motivate CEOs to seek out merger opportunities." Therefore, it seems every org must constantly be looking to merge. This is theory and obviously not practical. Thus the argument falls apart and one may easily conclude—absent any other evidence —CEOs are overpaid despite the authors’ Ivory Tower opposing conclusion.

The book wraps up with two critical ideas. First, “[i]nnovation and initiative have their place in any organization, but so do coordination and rules. The trick is knowing how much of each.” Absolutely true. Balance is the key to success. Finding that balance is what makes the difference between orgs that struggle and those that thrive.

Second, flouting the rules is sometimes required to get things done. However, without the proper checks and balances some of what is accomplished is not what was intended. The right rules can not only preclude the need to circumvent them but also lead to more of the right results; improving productivity and moving the org closer to optimizing.

The authors in concluding state, “Sometimes we don’t need Superman. Sometimes we need Clark Kent.” In other words, an org with a decent plan implemented will yield a significantly better result than the perfect plan not executed. Then go onto the Serenity Prayer. . . .

We have come full circle. Mr. Sullivan and Mr. Fisman provide much for the reader to consider and throughout the book make solid points with excellent anecdotal tales. But these same anecdotes take over the text and result in an unfortunately blurred overall message.