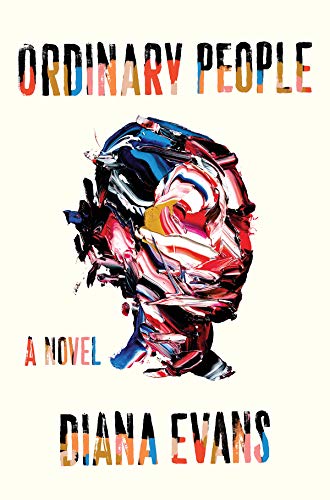 “a slow and detailed portrait of human relationships. . . . unquestionably a fine book and destined to be remembered not only for the stories it tells, but also for Evans’ compelling writing.”

There is an irresistible fascination to watching a relationship sour and falter, drawing the observer in at the same time as he or she recoils from the tragedy of it all. In Ordinary People, Diana Evans creates precisely this alluring proposition as she dissects the relationships of two couples.

Long standing friends, Michael and Damian live very different lives with two very different women. Living in South London with their daughter Ria and new son Blake, Melissa is black and beautiful like Michael. But Evans soon hints that the gloss could be going off their relationship with her sharp description: “They were a pair to turn a head, though in close proximity their faces revealed shadows, dulled, imperfect teeth and the first lines.”

Damian now lives in the Surrey commuter-belt with his white, middle-class wife, Stephanie, a woman who seems to have sated her life’s desires by becoming a mother. Like Michael, Damian sees the mundane and the necessary eradicate the passion from their relationship, and the passing of his activist father prompts him to question his own purpose and value, with the jobs market representing “the safe dead end of dangerous dreaming.”

The quirky house that Michael and Melissa have just moved into begins to reflect the couple’s relationship. Every problem becomes an omen that irks Melissa as she struggles to find equilibrium between her roles as mother, lover, and an independent woman with a career of her own.

In turn, Michael mourns the passing of romance thanks to “the rubble of domesticity that mounts at the door of passion.” So inevitably the battle lines are slowly drawn and beautifully depicted in prose that, once the reader is attuned to the depth and complexity of Evans’s writing, burns itself into the memory and demands to be read then reread.

The four main characters are revealed layer by layer, subtly edging a little deeper beneath the surface to the core of what is holding them together as much as what is pulling them apart. It is a slow, engaging process, enriched by insightful writing and the writer’s ability to hold a mirror not only up to the lives of these two couples, but also to the reader; because the everyday struggles these ordinary people face are uncomfortably realistic.

Taking its name from the well-known John Legend song, Ordinary People is a slow and detailed portrait of human relationships. It is unquestionably a fine book and destined to be remembered not only for the stories it tells, but also for Evans’ compelling writing.