The Order of the Pure Moon Reflected in Water 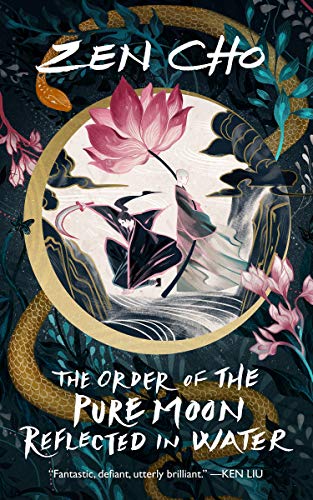 “an entertaining and engaging read”

Zen Cho’s latest work, a wuxia-style novella, starts off very classically with a brawl in a coffeehouse. But the brawl does not begin with someone recognizing the new customer as the bandit whose wanted poster is hanging on the wall; instead it begins with a different customer harassing a waitress—a waitress who happens to be a nun of the Order of the Pure Moon Reflected in Water.

That titular order lies at the heart of this story in a number of different ways. The setting of the novella, based on Malaysia, is a country in the midst of political turmoil more alluded to than explored in depth. What matters here is less the specifics of those conflicts—how they began, who has done what—than how they affect the characters, especially through the specific lens of the Order. For a novella this is a wise choice, though it may be frustrating to readers who want answers to those contextual questions.

If this story were told more conventionally, that nun (Guet Imm) would be the viewpoint character, or perhaps the leader of the bandits, a beautiful man named Fung Cheung. Instead the omniscient voice stays mostly on the side of Tet Sang, the leader’s second in command. He has deeply conflicted feelings about allowing Guet Imm to join the bandits after the coffeehouse brawl, for reasons which slowly unfurl over the course of the novella.

One of those reasons feels like a minor cheat of viewpoint. The bandit group is carrying something valuable to the buyer they’ve lined up, but the text merely refers to it as “the goods” even when otherwise showing Tet Sang’s thoughts in depth—and Tet Sang knows perfectly well what their cargo is. This allows for a more dramatic reveal for the reader when Guet Imm learns the answer, but it feels frustratingly coy before that. The story becomes stronger after the reveal, moving from a mostly lighthearted tale of wuxia-style adventures to something with greater emotional depth, and it’s possible that revealing it beforehand (or somehow concealing it from Tet Sang as well) would have added to rather than detracting from that.

There is something of a tonal shift throughout the novella as well. Guet Imm’s initial encounters with the bandits, both in the coffeehouse and afterward, are highly amusing. In particular, she has a charmingly forthright way of addressing (and defusing) any suggestion that the male bandits should be allowed to sleep with her simply because she’s a woman and there.

By the end of the tale, though, that sort of humor has given way to something much less amusing, as characters grapple with their respective pasts and what the proper response is to upheavals that threaten to destroy irreplaceable parts of their culture. Humor and drama often both become stronger when pulling together in harness, but here it feels a bit too much like first one, then the other, rather than a more integrated approach.

None of which negates the fact that The Order of the Pure Moon Reflected in Water is an entertaining and engaging read (enhanced by truly beautiful cover art, the work of Sija Hong). The setting is one which could easily support more tales, whether about the Order itself or not; the tidbits this novella supplies about the Order’s practices are enticing, but the sense of connection to real history and its sources of conflict means the world as a whole feels three-dimensional and solid. Guet Imm’s deadpan style of humor holds particular appeal, and Cho writes very fluidly about the mystical elements, suiting a world in which such things are noteworthy but not wholly outside the characters’ everyday experiences. The ending leaves a door open for possible sequels, which would be very welcome.