Operation Gatekeeper and Beyond: The War On Illegals and the Remaking of the U.S. – Mexico Boundary 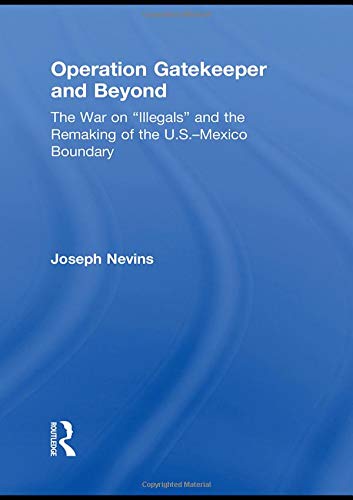 As the debate rolls on about Immigration Reform in the United States, as Congress considers President Obama’s vision to design a “Path to Citizenship,” and as Arizona tightens requirements on suspicious looking citizens, it would probably surprise anyone to know that Republican First Lady Pat Nixon stepped across the U.S. Border on August 18, 1971, and embraced the Mexican children while lamenting the border fence.

“I hope there won’t be a fence here too long,” said Mrs. Nixon. “I hate to see a fence anywhere.”

The First Lady visited a site in Imperial Beach, Calif., to inaugurate a state park that has since become the deadliest border between Mexico and the U.S., now known as the Operation Gatekeeper border.

Nevins’ book on Operation Gatekeeper is a detailed and heartbreaking account of this program. No matter how one feels about illegal immigration, only the coldest of hearts will not be touched by the devastation, inhumanity, racism, and cruelty heaped on the lives of thousands trekking across the Imperial Valley desert between San Diego and Baja California.

Long before the Gatekeeper program was implemented in October 1994, there was a 370-acre, former naval base at the extreme southwest corner of the continental United States. It was the site of the initial international borderline after the U.S.-Mexico War ended in 1848. The park’s planners, according to the San Diego Union newspaper, envisioned free access to it for people on both sides of the boundary called Border Field State Park.

On that August day in 1971, hundreds of people assembled on both sides of the border to witness Pat Nixon’s visit. After dedicating the new park, the First Lady requested a member of her security detail to cut a section of the barbed-wire barrier so that she could greet the hundreds of Mexican nationals who came to meet her.

She took an unscheduled plunge into a reaching, waving throng of Mexicans who lined the Tijuana side of the border to witness the ceremonies. Engulfed by Mexican well wishers for almost 15 minutes, the Secret Service looked nervous as the Spanish-speaking crowd surrounded Mrs. Nixon. The mariachi band followed closely behind as she shook hands and hugged children. She turned and said to her escort, “When is this coming down?”

While it is impossible to know exactly what Pat Nixon intended almost 40 years ago in Imperial Beach, her words and actions suggested openness to imagining something fundamentally different in the U.S.-Mexico borderlands.

Nothing remains of Friendship Park. The lawn, the stone picnic benches, the stabilized adobe perimeter wall are no more. Instead, a swath of churned-up earth at least a 150-feet wide cuts through the southern portion of the mesa and then plunges down to the beach. On the far side stands what remains of the paved walkway and the monument or marker.

Between San Diego and Mexico, there is a stretch of border with the misleading name of Imperial Beach. Beyond this community for slightly more than 5½ miles of the border, from the Pacific Ocean to the San Ysidro Port of Entry is a wide variety of terrain located close to residential neighborhoods and transportation routes north. This is where the border patrol lost control and what they attempted to lock up.

On October 1, 1994, the U.S. Attorney for the Southern District of California, and the Executive Officer for Immigration Review, implemented their new strategies to “reverse decades of neglect along the San Diego border.” The program, Operation Gatekeeper, was lauded as a, “bold and far-reaching initiative to restore integrity and safety to the nation’s busiest border was launched,” according to the press releases.

The strategy was that the new border patrol would lure just a few people away from the popular suburban migration routes in the San Diego area into the harsh and desolate mountain areas. However, they were wrong. Instead of using the available roads and urban connectors, migrants attempted their crossing through the Imperial Desert or over the Mountains that are north of Tecate. Despite the hazards of extreme temperatures in the desert and mountains, people have not been deterred from trying to enter the United States to find work.

Instead of reducing the number of entrants, deaths increased by 600 percent in two years while the numbers of those who successfully made it stayed at the same rate. The rate of those who were apprehended by the INS decreased by less than 1 percent.

In a Union-Tribune newspaper story written by Leslie Berestein, the tale of Maria Eugenia Martinez and her fateful attempt to return to her job in Los Angeles was unfortunately not unusual as an example of what happened when Operation Gatekeeper became the new border patrol strategy.

Berestein wrote that Martinez had been walking four hours along with a half-dozen others behind a smuggler through the rocky brown foothills and canyons on the western slope of the Imperial Valley desert. The mid-summer temperature was well over 100 degrees. People were running out of water. Some of them, including Martinez, 39, were starting to feel sick from the heat.

“She needed to get back to work but her resolve began to give way to heat exhaustion and dehydration. Three miles south of rural state Route 98, the road the migrants were likely headed toward, Martinez crumbled to a stop in a remote corner of the desert called Davies Valley.

“The Border Patrol eventually found her but by then she had been dead at least three days. Her decomposing body was found in a dry wash, her head resting on a stranger’s backpack, her limbs stretched across the pebbly sand as if she had fallen into bed exhausted.

“Martinez joined the list of nearly 3,000 people known to have died while crossing illegally into the United States from Mexico since January 1995, three months after Operation Gatekeeper was implemented along San Diego County’s urban border areas and pushed migrant traffic east.”

“It was always the belief that the geography of the Otay Mountains and of the desert was too harsh for the numbers. The Border Patrol always felt there would be some crossing there—there always had been—but that by and large, the majority would not try to come across in those areas,” said Doris Meissner, the Commissioner of the INS in 1996.

By the time there was an inquiry in 1996, 1,500 people died along the entire U.S./Mexico border on the California/Baja California border.

The program was launched with a lot of hype and immediately declared a great success in 1995 by the U.S. Border Patrol, the INS, and Department of Justice officials. However, after conflicting and damaging reports emerged one year later, the program was declared a failure of devastating proportions.

The reports of deaths sparked an inquiry into the statistics that were filed by Operation Gatekeeper. Nothing added up and Department of Justice’s Office of the Inspector General (OIG) began an investigation of these allegations of fraud.

Nevins takes his readers on a history behind Operation Gatekeeper that goes north beyond San Diego and echoes an attitude about California’s relationship with its immigrants from the south.

He shares stories about the part of Los Angeles formerly known as Chavez Ravine that eventually became home to the Los Angeles Dodgers baseball team. He tells how the community went from being a lovely and colorful collection of barrios to a baseball park, which sheds light on the attitude of the Border Patrol system of Southern California from Los Angeles to San Diego.

In 1949, Chavez Ravine had about 1,100 homes in a close-knit neighborhood with yards filled with flowers and rich gardens. However, none of that mattered when Walter O’Malley began to eye Los Angeles for the new home of his Brooklyn Dodgers.

The Los Angeles Housing Authority claimed eminent domain on the community and bought up the land, moving all residents out so the property could be converted to a baseball park. On April 18, 1958, the Los Angeles Dodgers played their first game in LA.

Operation Gatekeeper and Beyond is one of several new books on illegal immigration and the plight of those here and those trying to get here that have suddenly flooded the market.

Some good examples are The Wind Doesn’t Need a Passport: Stories from the U.S.-Mexico Borderlands by Tyche Hendricks; Migra! A History of the U.S. Border Patrol by Kelly Lytle Hernandez; Moving Millions: How Coyote Capitalism Fuels Global Immigration by Jeffrey Kaye; Mexican Migration and the U.S. Economic Crisis: A Transnational Perspective by Wayne A. Cornelius; and Illegal: Life and Death in Arizona’s Immigration War Zone by Terry Greene Sterling.

Each of these books has a story to tell and most tell it better than Operation Gatekeeper. While Nevins’ book has excellent research and important history, the story is too old to be as compelling as Migra, Mexican Migration, or Moving Millions. It is history that has righted itself in terms of outing the false success stories on the backs of tragedy. Unfortunately, these stories come at a time when economics trumps tragedy and the history of a failed operation will not get the same attention as the economic crises in the public’s back yard.

Operation Gatekeeper has a place on the shelf of well-documented work on our fractured history of border patrol and is an important text for anyone looking for detailed information on the borders between California and Mexico.

Reviewer Geri Spieler is a journalist and the award-winning author of Taking Aim at the President: The Remarkable Story of the Woman Who Shot at Gerald Ford. She is the winner of the 2010 Sharp Writ Book Lovers award for nonfiction.