Operation Devil Horns: The Takedown of MS-13 in San Francisco 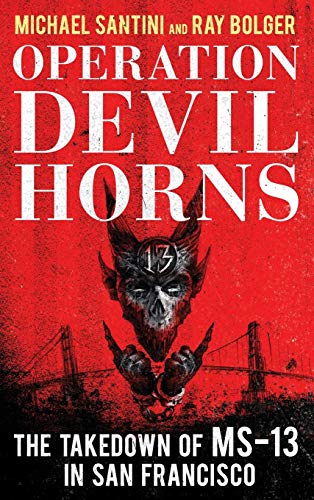 “Operation Devil Horns is the type of book that will make you proud and make your blood boil.”

The “MS” in MS-13 stands for Mara Salvatrucha. La Mara is a street in San Salvador, the capital city of El Salvador, while the Salvatrucha guerrillas fought during El Salvador’s long civil war that lasted from 1979 to 1992. Many of the gang’s founders began their brutish and violent lives as child soldiers in that conflict, and when they migrated to California in the 1980s, they put these skills to good use against established black and Mexican gangs in the city. The “13” denotes the gang’s allegiance to the Mexican Mafia (the 13th letter of the alphabet is “M”), one of the most powerful prison gangs in the US.

Most Americans know nothing of this history. For them, MS-13 appeared out of nowhere during the early 2000s. For some, the first jolt came in 2003 when the body of teenager Brenda Paz was found in the D.C. suburbs. Paz, a former MS-13 member turned informant, was stabbed to death by former “homies” after she tried to re-enter the gang. For others, their first exposure to MS-13 came in 2015, when presidential hopeful Donald Trump used them as an example of why the United States needs stricter border enforcement.

Operation Devil Horns avoids the sensationalism in order to tell a real blood-and-guts story of how Homeland Security and a few rouge San Francisco police officers and attorneys broke up the infamous 20th Street clique of MS-13. Told in the criminal argot of the streets, Operation Devil Horns is a raw look at MS-13 and is partially told by Michael Santini, the HIS agent who spent the better part of four years bringing down MS-13’s most dangerous clique in San Francisco.

This book is a blow-by-blow account of Operation Devil Horns, which lasted roughly from 2005 until 2009. Prior to the operation, 20th Street effectively used violence and coercion to expand their territory in San Francisco. Their targets included the Miceros, a Mexican identity theft and fake ID ring, and the Norteños, a collection of gangster cliques allied with Nuestra Familia, the sworn enemies of the Mexican Mafia. Civilians were not off-limits either, as this book recounts the murders of 14-year-old Ivan Miranda, who was nearly decapitated with a kitana by 20th Street thugs looking to revenge a Norteño hit on one of their homies (Miranda was not a gangster), and the Bologna family, which were gunned down while they sat in their car at a red light. It was this latter crime—the senseless slaughter of three innocent people—that almost brought down the administration of Mayor Gavin Newsom.

Underneath all of this butchery were federal and local law enforcement officials doing the dirty work of flipping gangsters, going undercover, and recording major MS-13 meetings in San Francisco and Los Angeles. Operation Devil Horns took agents as far afield as El Salvador and Honduras, where they worked alongside local officials, many of whom would later be assassinated by MS-13 gangsters.

The heroes of this book are many. Chief among them is co-author Michael Santini (a pseudonym). Prior to 9/11, Santini worked with the US Border Patrol, where he saw large groups of migrants sneak across the US border so “they could creep father north and hitch rides with the smugglers who cruised Route 905.”

Later, as an investigator with Homeland Security, Santini’s successful flipping of gangsters Diego and Casper, along with his successful undercover stolen car operation, were undercut at points by the glory hounds of the FBI and the politicized SFPD. Alongside Santini in his crusade were Ricardo Cabrera, a Salvodoran immigrant and SFPD officer with a wealth of street knowledge about MS-13, and attorneys Laura Gwinn and Nelson Wong, who bucked liberal San Francisco in order to pursue justice.

The villains of this piece are enlightening, for they showcase municipal corruption, cynicism, and the idiocy of bleeding-heart politics. Despite the fact that Immigration and Customs Enforcement (ICE) statistics indicated that, between February 2005 and September 2007, 75% of all known Central American gangsters in California had entered the country illegally, and despite the fact that San Francisco experienced an unprecedented crime wave between 2005 and 2009, the city councilors clung tenaciously to its sanctuary policy. Even after Operation Devil Horns and the murder of the Bologna family, the city kept the policy because, as the authors point out, they are beholden to a noisy set of far-Left community activists—the type of activists who protest the city even when known gangbangers are brought to trial for murdering fellow Latinos.

Gavin Newsom is painted darkly in this account, for he is shown to be more comfortable grandstanding against right-wing activists than actually doing anything to help his city. Heather Fong, then the top dog at the SFPD, is another incompetent bureaucrat who, despite running a once prestigious department into the ground, retired “with an annual pension of $250,000, based on her final year’s salary of $500,000, which included pay for saved-up vacation and sick days.” Fong’s well-known bumbling did not stop the Obama administration from making her assistant secretary for local law enforcement at Homeland Security in 2014.

Finally, there is Kamala Harris. The current Democratic candidate for president “was openly accused by some law enforcement veterans of cherry-picking cases for prosecution.” On top of that, Harris’s office refused to charge MS-13 gangster Popeye with any crime, despite the fact that he was the driver in a deadly hit-and-run in the city. As early as 2008, observers believed that Harris was angling to become a bigger fish in a bigger pond.

Operation Devil Horns is the type of book that will make you proud and make your blood boil. The pride comes from those law enforcement figures who, against all odds, managed to rid San Francisco of the 20th Street menace. The anger comes from the city’s politicians and activists, who blew up these accomplishments in the name of some half-assed utopian dream. Operation Devil Horns is more than true crime—it’s a 21st century civics lesson.