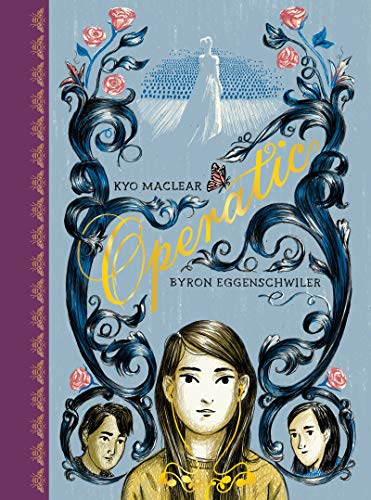 Open this graphic novel and the striking yellow and red illustrations will keep you turning the pages. Kyo Maclear and Byron Eggenschwiler have written a book about the power of music in our everyday lives.

Mr. Kerner is a teacher with a difference. "He doesn't act like it's his job to shape us into considerate and well-behaved individuals who'll fit harmoniously with the rest of society." It's almost the end of middle school. His final assignment is to have each student choose a favorite song that is meaningful in his or her life today, to be called: "Soundtrack of My Life." The song should be original and something that connects with the student personally. When some students feel that they can't sing, or that they destroy a song, Kerner tells them that he "believes that everyone has a song. He says that somewhere in the universe, there is the perfect tune for you.”

Charlie could hardly concentrate. She kept on looking at the empty desk in the corner and thinking of Luka. She wondered why he had stopped coming to school. She also kept looking at Emile, another classmate. The rest of the kids called him "Super freak" because of his passion for insects. "Emile might not have a song, but he can tell you everything you'd ever need to know about the courtship songs of cicadas . . ."

In order to inspire his students, Mr. K introduces them to the different genres of music from the 1970s until today. He plays various songs on his guitar and shows them videos of professional singers in each era. When the class laughs at Patti Smith singing punk rock in 1975, Mr. K tells them that it's a different way of singing. It's a song with "immeasurable feeling" to that singer. He also plays his own favorite song on his guitar and explains why he chose it. He tells them that the song they choose should make them feel like it was made for them.

Mr. Kerner then travels to different listening zones. Charlie keeps on noticing Emile and hopes he'll walk home with her after school. He doesn't judge people for their style of music. "When he talks to me, he has this way of looking sideways into my eyes that makes me kind of . . ." He knows all about bees."

The next zone is 1980s rap and hip-hop. Mr. K plays vinyl records on a turntable, using it as an instrument, then jazz, punk rock, reggae, and bluegrass. Charlie and her friends begin to think of songs in those genres. Then he discusses EMO, which means "emotional hardcore" or emocore. ". . . it's music about big emotions—fear, loneliness, jealousy, love." The students think it's uncool.

The next stop on the musical journey is opera. The kids hate it. They think it's music for dead people. Except Charlie, who is moved by this genre. "Today a song snakes inside me. It moves like a plant. . . . It's enough to make me forget everything around me." The song that Mr. K plays is by Maria Callas, one of the greatest opera singers of all time. Charlie decides to learn all she can about Maria's tragic early life. She was born in 1923. Rejected by her parents because she wasn't a boy, not as pretty as her older sister, Maria found her own way to shine. She stayed up late listening to records, dreaming of becoming a diva. She realized that she had a magnificent voice and that singing would win her popularity in school.

Mr. K. then talks about songwriting. He plays some of his own songs, which the students accompany on their guitars. Students begin to think of the songs that they will compose. Charlie thinks about Maria Callas' teenage life and adulthood. Only Maria she was singing did she feel love. "She sang her dreams out loud." She practiced arias, trills and scales. At 17, she joined the Greek National Opera. However, not everyone approved of her singing. "Squawky. Metallic. Muddy in the middle registers." But Maria didn't care. She kept on performing even when some members of the audience threw carrot sticks, registering their disapproval. But she did get flowers from those who liked her voice.

The students begin to choose their favorite songs. Charlie chooses a song by Maria Callas. She realizes that anyone can be a diva." It seems to me if opera is about anything, it's about refusing to be small or ignored . . . We all want to do big things in our lives." And that's the lesson the reader will take away.