One Was A Soldier 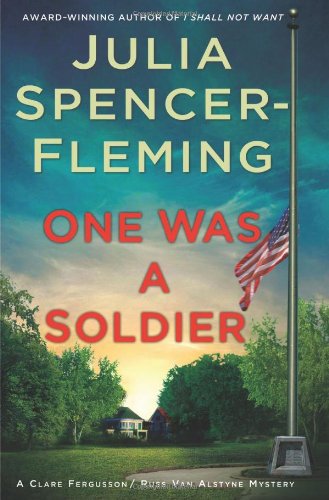 “To Ms. Spencer-Fleming’s credit, she doesn’t have an easy answer to give—no one gets an easy out. Clare’s faith doesn’t blind her to the pain of the world and Russ’s lack of faith doesn’t guarantee enlightenment. Everyone blunders; the lucky ones have someone that cares enough to blunder along beside them.”

If it’s shocking that the tiny Adirondack town of Miller’s Kill, NY, has enough wounded veterans to start a counseling support group, consider how many U.S. police departments, EMTS, and hospital personnel are staffed with vets. This subculture recognizes their members despite civilian stratification.

This group has five members: a doctor, an Episcopalian priest, a cop, a just-barely graduated from high school kid, and an accountant. Their loyalty to each other, so critical to leaving a war zone alive, binds them in a way unimaginable to outsiders. When one of the group dies and is ruled a suicide, the others are doggedly determined to live up their motto not to leave anyone behind. Even (or perhaps especially) if the person is dead.

Clare comes back from a tour of piloting helicopters in Iraq unable to wake up or sleep without pills and alcohol. She knows telling Russ will wreak havoc on their lives, but once the secret is out the real issue—living clean—will have to start. In typical addict fashion (and who among us has not said we’ll start living better tomorrow) she is not willing to face that just yet. Giving advice to the vets group, grumbling about her mother’s interference in the wedding and administering to her elderly parishioners takes precedence over facing her personal demons. Russ wants so badly to be man-and-wife he misses the signs of Clare’s struggle.

The problem and joy of small town life is that everybody is connected. The MKPD cop/veteran who comes back and loses his temper in a spilt second is not a good thing for a guy with a gun, a badge, a wife, and a child. He’s going to explode—maybe at an inappropriate time. How does the chief balance his need for skilled officers and follow his duty to protect the town? The doc keeps forgetting stuff, a problem he tries to hide with copious note taking on his Palm Pilot. The accountant spends money on splashy, useless stuff.

Clearly, the physical and mental damage done to humans during war is hard for civilians to fathom, let alone live with. To Ms. Spencer-Fleming’s credit, she doesn’t have an easy answer to give—no one gets an easy out. Clare’s faith doesn’t blind her to the pain of the world and Russ’s lack of faith doesn’t guarantee enlightenment.

Everyone blunders; the lucky ones have someone that cares enough to blunder along beside them.