One of Us Is Sleeping 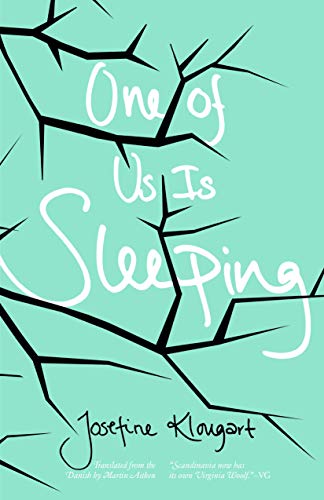 The biggest problem with Josefine Klougart’s One of Us Is Sleeping is that the one asleep is probably the reader.

Even a stream of consciousness novel, which is what this is supposed to be, is supposed to go somewhere—and leave the reader with the impression that he has been there and that the journey, however long, was worthwhile.

This novel opens with a section whose title seems an inadvertent forewarning: The Light Comes Creeping. Alas, so does the storyline, which seems to be a woman’s novel-length reflection during a snowbound Danish winter on a broken romance. On and on it lurches, in fragmented thoughts and images, till you want to say, “All right, already, I get the picture; the lout broke your heart. Get over it and get on with how it all happened.”

So much for inspiring reader empathy!

Okay, maybe even at this late date there is something rotten in the state of Denmark, and for all we know it is the SOB who left her. But this gal is so self-absorbed it’s a wonder she saw him leave. No problem; he won’t really be missed. The protagonist resolves on page 210 “To enter inside the grief and remain there.” She even adds: “I will insist on being a distressed person within the world.”

Fine. But she’ll have to live with the knowledge that self-absorption just ain’t all that interesting. In fact, maybe that’s why you-know-who is now her used-to-be.

One suspects that the author forgot that even in a stream of consciousness novel, the story’s the thing. An interior monologue is a wonderful literary device depicting the thoughts and feelings that pass through the mind, but, like every other element of fiction writing, it is supposed to advance a story, not get stuck in egocentric maundering—and certainly not stray into a bog of self-pity.

In Ulysses, perhaps the best known of this kind of novel, author James Joyce takes the reader on a virtual walking tour of the Dublin, Ireland, of 1904. The story is alive with the sights and sounds of the world in which the protagonist, a middle-aged Jew, lives as while out for a walk he reflects on his youth. The reader comes away feeling that he has been on a fascinating municipal voyage with a very entertaining guide.

Another well-known example of the stream of consciousness novel is Mrs. Dalloway by Virginia Woolf, whose titular protagonist goes out one day in London to buy flowers for a party she is hosting.

As she goes, her thoughts introduce the reader to a complex and interesting character, one whose thoughts are not exclusively about herself, but about the society in which she lives and about the people she meets and those she knows. This weaves together for the reader the protagonist’s inner and outer reality, shedding light on the story, not just on the protagonist’s state of mind.

Both Ulysses and Mrs. Dalloway are on Time’s list of the best 100 books published since 1923. They should be required reading for the author of One of Us Is Sleeping.