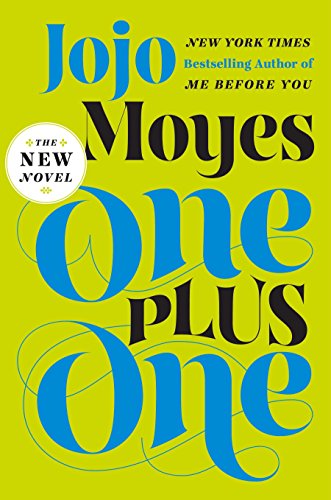 “All in all, though, One Plus One is a breezy summer read in the vein of Little Miss Sunshine, light and entertaining as long as one is content with unrealistic situations and a fairy-tale ending. And who doesn’t need a fairy tale now and again?”

“Rich is paying every single bill on time without thinking about it. Rich is being able to have a holiday or get through Christmas without having to borrow against January and February. Actually, rich would be just not thinking about money all the bloody time.”

In a book with many funny moments, it’s enlightening that this sentiment is at the core of Jojo Moyes’ newest book One Plus One.

Single mom Jess Thomas is struggling to raise her genius daughter and her ex’s son on the wages of a cleaning woman/barmaid. When her daughter gets the chance to attend a prestigious private school, Jess is willing to do anything necessary to collect the funds to allow her to attend, even if it means a cross-country trip with her distant employer.

Software guru Ed Nicholls is immediately sorry for volunteering to drive Jess and her kids to Scotland, but anything is better than facing the music for his bad business decisions and familial neglect.

What follows is an entertaining tale of opposites attract. It won’t surprise any reader of popular women’s fiction that these characters develop a deep connection in mere hours or that they each fight the attraction until they can’t fight any more.

What sets One Plus One apart from the pack of books with similar themes is Moyes’ sense of humor. An uncomfortable night in a strange place (in this book, it’s the car) is de rigeur; in One Plus One it is a chance for some character development and humorously realistic exchanges like this:

“This car isn’t big enough for two people who aren’t talking to each other.”

“I was going to say it makes me think I should get out more.”

The difference in the economic status of each character, as noted above, is also handled nicely. In the given set up, it would have been an easy thing (and stereotypical) to develop a Mr. Rochester/Jane Eyre type of relationship: the needy female devoted to a distant male, slavishly grateful for each crumb of his attention. Instead, Moyes’ Jess and Ed are more akin to Elizabeth Bennett and Mr. Darcy—each equally sharp witted and neither superior to the other, despite their finances.

Moyes does a good job of delineating her characters in just a few brush strokes: Jess, Ed, and the kids are easy to understand and easy to picture right away. The chapter structure—each chapter is named for a character—makes the job easier, but Moyes leans on this device so much that she removes subtlety in the characters’ individual voices. Aside from childishness in the tone of the daughter’s voice, each chapter is indistinguishable in voice from another.

It’s a small weakness in a generally pleasant novel, but taken alongside the formulaic story (weak and lying exes, dying parent, rich man/poor woman storyline), it takes the novel from four to three stars.

All in all, though, One Plus One is a breezy summer read in the vein of Little Miss Sunshine, light and entertaining as long as one is content with unrealistic situations and a fairy-tale ending. And who doesn’t need a fairy tale now and again?