One Hundred Victories: Special Ops and the Future of American Warfare 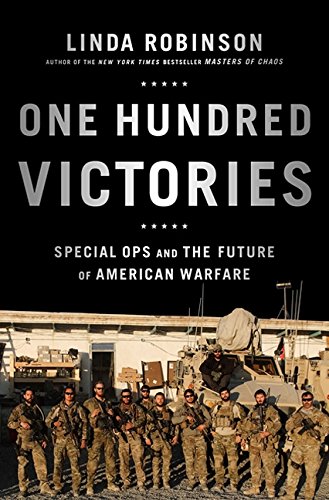 “. . . of interest to anyone interested in how counterinsurgency is conducted at the village level.”

Although the war in Afghanistan has now become’s America’s longest conflict, it is still largely unknown to most Americans. As the U.S. begins to wind down combat operations and bring troops home, some excellent history and analysis of this still controversial war is beginning to emerge.

Linda Robinson, a RAND corporation analyst and author of previous works on U.S. Special Operations history and a history of the surge in Iraq, has written a timely work that is part military history and part after-action analysis.

Focusing on the actions of special operations troops during the Afghan surge, Ms. Robinson examines the challenges the U.S. military and its allies faced attempting to turn the tide of the war from its nadir of 2006–2007.

During this time, the Taliban insurgency and their Al Qaeda allies assumed de facto control of large swaths of southern Afghanistan, including the vital Kandahar and Helmand provinces and undermined the U.S.-led effort to create a stable and secure government.

As the incoming Obama Administration reviewed its Afghan policy and strategy, and developed what became the surge of U.S. troops into Afghanistan in 2010, the military faced the classic challenge of how to wage a successful counter-insurgency campaign—through major conventional military actions by U.S. troops or through small teams of specially trained units like the Green Berets and Navy SEALs that focus on training indigenous forces to defend themselves.

The surge was intended to regain control of those provinces, reduce the Taliban insurgency and aid the Afghan government in assuming responsibility for securing their country.

In the end, the U.S. chose to do both, and Ms. Robinson focuses this book on the efforts of small teams of Americans living and fighting in some of the most isolated parts of the country to train and support the Afghan Local Police, selected villagers and tribe members trained to defend their villages and hamlets from the Taliban and a key component of the plan for the Afghans to assume the lead role in securing the remote villages scattered throughout the country.

Ms. Robinson provides an excellent primer on how counterinsurgency is done at the village level, from the isolation and hardships the American endured to their patient cultivation of the trust of village elders to side with them in fighting the Taliban.

The importance of cultural understanding, known in the military as “human terrain analysis,” emerges as one of the dominant factors and key challenges in the success of any counterinsurgency effort.

Ms. Robinson describes the efforts the special operations units placed on understanding not only Afghan culture and politics at the regional and district level, but the relationships, economic challenges, and societal structure between elders within and between isolated and often poor villages.

In addition, Ms. Robinson also examines the critical interactions those special operations units had with their conventional Army counterparts and the Afghan government.

The U.S. has spent the last decade evolving the command and operational relationships between special and conventional forces, with various levels of success. As Ms. Robinson notes, the lack of a unified command for the various special operators from the U.S. army, navy, air force, and their NATO allies was not rectified until 2011–2012, nearly a decade after the first troops entered country.

The overlapping units often conducted missions without knowing other units were in the area, creating diffusion of effort and increasing the chances for fratricide.

In addition, the relationship between Green Berets training local Afghans and conventional Army units hunting down Taliban was often fractious as well, frequently requiring intervention from higher headquarters to ensure unity of effort.

Ms. Robinson does not shy away from discussing highly controversial events that occurred during this critical period in the Afghan war, including a cross-border firefight with Pakistani forces in 2011 that killed 24 Pakistani soldiers and resulted in the temporary closure of supply lines through Pakistan for American and Coalition forces.

Ms. Robinson clearly sides with the special operators’ position that Pakistani forces fired on them from various border posts, resulting in a U.S. airstrike that decimated the posts and inflicted the heavy casualties.

The rampage of a U.S. soldier that killed 16 Afghan civilians on early 2012 is also discussed as particularly hard for special operators, as the convicted solider was part of a regular infantry squad that had been detailed to assist the Green Berets in training Local Afghan Police.

A noticeable shortcoming of this book is the total lack of maps showing the diverse geography of the country the Special Operators worked to hard to understand. In a country with nonexistent transportation infrastructure and virtually no road network beyond a few national highways, geography was a significant factor in the conduct of operations for both sides from a mobility and resupply perspective.

U.S. troops faced very different geographic effects on military operations in Kandahar Province than Kunar Province, and a well laid out series of maps highlighting the isolated and challenging typographical situation U.S. troops faced would have really demonstrated the heroic efforts of these units, particularly for readers unfamiliar with Afghanistan’s rough terrain.

Ms. Robinson offers a number of concluding thoughts on the roles and missions of special operations units post-Afghanistan given the on-going conflicts in Mali, Syria, Yemen, and other locations in the Middle East and North Africa.

This volume highlights both the promise and pitfalls of special operations attempting to train foreign militaries to defend their countries and should be of interest to anyone interested in how counterinsurgency is conducted at the village level.