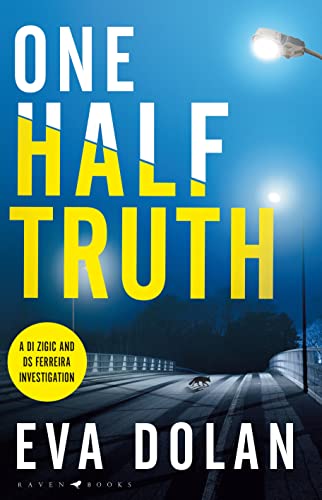 “One Half Truth is a top-notch police procedural from an author with a sure hand, an unwavering eye for detail, and a clear voice perfectly suited to the genre.”

Considered in the broader world of crime fiction, police procedurals present their own unique set of quirks and particularities. While ardent fans of the subgenre understand the boundaries and guidelines within which the procedural must operate in order to qualify for membership, casual readers may require occasional reminders of what makes a really good procedural, well, really good.

Take as an example One Half Truth, the new Zigic and Ferreira crime novel by Eva Dolan. Her sixth offering in the series, it takes us through the investigation of the murder of a young apprentice journalist who was brutally executed while walking home from a social club in Peterborough, England.

Jordan Radley had recently published an article featuring members of the club who’d been thrown out of work when a local engineering factory closed down. Police detectives investigating the homicide must determine if his murder is connected to that story or perhaps to whatever he was currently working on. Or perhaps it’s entirely unrelated.

The strength of the procedural lies in its elevated sense of verisimilitude. Readers want to feel as though they’re on the inside of an actual police investigation. What’s it like to kneel beside the victim at the crime scene, to interview witnesses who display suspicious behavior, and to stand in front of a whiteboard searching for connections among disparate bits of evidence?

A procedural will follow the investigation through multiple leads, beginning with the people closest to the victim and working outward from there. In One Half Truth, for example, the case centers on the small group of club members interviewed by Jordan for his piece, and detectives come back to them multiple times as new information continues to point in their direction.

Repetitive? To a certain extent. But Dolan keeps the story moving, and it’s always quite reasonable for Zigic and Ferreira to show up again and again on the doorsteps of these men as new threads reveal additional connections.

In reality, suspects almost never parachute down from randomly passing airplanes but are often right there, close by, hoping not to be noticed. It takes tireless legwork and a dogged sifting of the evidence to uncover them.

In addition to a detail-oriented, spiraling type of storyline, a realistic procedural features a team of police detectives dividing up the work and applying their own individual skills to the case.

Casual readers often balk at the number of characters involved, but unlike a cozy mystery or other amateur detective story that features a single main character, a curious friend to help out, and a local police official to make the actual arrest, a procedural involves a team. Walk into the detective room of any police service in a medium to large city and that’s what you’ll find—desks, workstations, cubbyholes, and a busy group of people working the evidence.

In One Half Truth, for example, the team numbers eight, including Zigic and Ferreira, plus the Scenes of Crime Officer when Jordan’s body is found and a narcotics detective who’s also peripherally involved.

At times it’s a rather high number for readers to juggle as the story moves forward, especially when some of them have appeared in previous novels where aspects of their character have already been fleshed out. If this is your first Dolan novel, then, you might want to pay close attention in order to keep the various detectives separated in your head.

Is it worth the effort? Is One Half Truth a crime novel you’ll want to spend time with, even if you haven’t encountered the series before?

You bet it is. Dolan is an excellent writer whose work is a pleasure to read.

For example, she has a talent for representing a detective’s thought processes when interviewing a potential suspect. As Zigic questions a man with a previous record for selling converted replica guns, the type of weapon that killed Jordan, he remembers the man’s behavior under questioning in the past:

“Not a hardened criminal, just a man with a marketable skill and lack of basic morality. With his house full of weapons and kit, denial had never been an option . . . Which had made the case easier at the time but it meant that now Zigic had no idea whether he was lying or not. Simply didn’t know what that looked or sounded like.”

Dolan also does an excellent job of highlighting the subtleties and nuances in what people say or do, the things to which a good detective must be sensitive. While questioning a frightened witness, Zigic “wanted to stay and try to talk her around but she was scared, he knew, and fear didn’t listen to logic or appeals for assistance; it went straight to say nothing, make yourself small, run as far as you can.”

If you enjoy the likes of Peter Robinson or Ian Rankin and you haven’t yet discovered Eva Dolan, you have a pleasant surprise waiting for you.

One Half Truth is a top-notch police procedural from an author with a sure hand, an unwavering eye for detail, and a clear voice perfectly suited to the genre.