Once Upon a Time We Ate Animals: The Future of Food 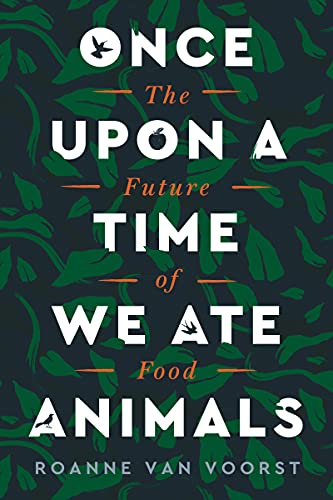 “While it’s not likely that humans will completely stop eating animals, it’s likely and desirable that we’ll eat, exploit, and harm far fewer animals than we do now. Once Upon a Time We Ate Animals cracks open the door to a kinder, more sustainable future.”

Once Upon a Time We Ate Animals argues a post-meat future is upon us whether we realize it or not. Author Roanne Van Voorst, an anthropologist trained in future forecasting and a committed vegan, declares “Much sooner than you think we will eat differently, work differently, use different things, take different school trips, and pamper different pets. Above all, we will think differently about what is good and what is evil.”

Van Voorst bases her argument for an inevitable “Protein Revolution” on interviews with former ranchers and other meat producers turned vegan, the rise of “sexy and vegan AF” influencers on Instagram and other social media, the concurrent rise in plant-based meat alternatives (think Impossible Burger), and most convincing of all, an impending demographic shift where today’s children and teens, comfortable with eating nut-cheeses and plant-based proteins, grow up to become adult consumers who determine food policies with their pocketbooks.

Yet Van Voorst is more an advocate for a vegan future than an examiner of a social trend. Most of the book is dedicated to arguing why we need to go vegan rather than demonstrating that we inevitably will. Once Upon a Time We Ate Animals is replete with the routine cruelties toward animals that most meat eaters (including this reviewer) would rather ignore, such as the meat and dairy industries tally of some 66 billion cows, pigs, and other farm animals slaughtered annually for human consumption. Mortality for fish and other aquatic creatures killed due to our flesh-oriented diet, meanwhile, is estimated at 150 billion lives annually. Little wonder Van Voorst concludes that “The idea that every week more animals are killed for human consumption than humans who have died in all wars in human history combined is something we can hardly imagine.”

If cruelty isn’t sufficient for giving up meat, Van Voorst lays out how a meat-oriented food system is a leading driver of climate change.

While a certain future may be desirable, that doesn’t make it inevitable. Humans evolved over millions of years to be omnivores, and a flesh-based diet gives a full array of animo acids for a protein- and fat-rich (and tasty) meal that can be shared to facilitate social bonding. As Van Voorst notes, while the demand for vegan food may be rising in the West, there’s been an increase in demand for meat and dairy in non-Western countries.

Plant-based proteins are lower in amino acids and not as easily absorbed by the body, yet Van Voorst sees the reason for meat eating as stemming largely from an ideology of carnism that leaves otherwise kind-hearted individuals accepting widespread cruelty toward animals as normal and necessary.

No author can be reasonably expected to draw a comprehensive picture of a distant (or near) future. Van Voorst is no naïve idealist, clarifying that a plant-based world is not perfect, but she ignores too many questions in her quest to make the future vegan. And some of those questions should interest an anthropologist.

The book’s “intermezzo” chapters, which offer a vision of what life will be like after the Protein Revolution, are so cold and moralistic that it can’t be a coincidence that her fictional protagonist is named Winston Smith (married to Julia), which are the names of the doomed dissidents in George Orwell’s 1984. How likely is it that after the Protein Revolution inflexible, unrepentant “meat addicts” will be willing to subsist on insect burgers eaten far from the impressionable eyes of children?

It’s far more likely that if meat is effectively banned, an illicit and lucrative market in animal flesh will arise (one not concerned with questions of ethics and cruelty). And will all the newly liberated farm animals really be adopted as pets until they die peaceably and are replaced by robot cats and mechanical dogs? Or will entire species of domesticated animals go extinct when the market for them collapses? What happens to family and social life when bonding over a shared meal is replaced by food pills and shakes eaten every few days? And will anyone other than the eccentric nature enthusiast care about animals when they become so distant from daily human life?

Perhaps one day, and soon, we’ll look back with shock and sorrow at the once routine suffering inflicted on animals whether from food production, medical research, clothing manufacturing, or other all too common ways that animals are harmed. Van Voorst rightly notes that shifts in how we eat are part of larger changes in how humans regard their animal kin, not least of which may one day include changes in legal status.

While it’s not likely that humans will completely stop eating animals, it’s likely and desirable that we’ll eat, exploit, and harm far fewer animals than we do now. Once Upon a Time We Ate Animals cracks open the door to a kinder, more sustainable future.