Once Upon a Diamond: A Family Tradition of Royal Jewels 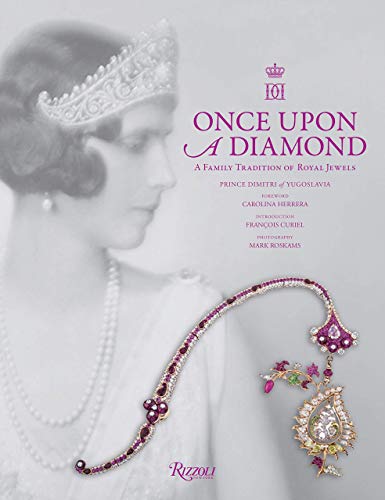 Once Upon a Diamond is most definitely more than a history of family jewels. This tome recounts the genealogy of Prince Dimitri’s family, the enormity of its breathtaking jewelry collection amassed during generations of monarchs and various titled relatives, as well as a memoir recalling how all of this played a part as to who and what he is today. The royal history spans Italy, Greece, Belgium, Russia, and Yugoslavia to name a few countries, as well as enough titles to fill a who’s who of blue-blooded titles.

The litany of titles and their intertwining relationships with these incredible gems is more than enough to be a book that stands on its own as there is a surfeit amount of background offered about each piece, its heritage, and its gemstones. The saddest part of this segment is that the photos are original, which means they’re aged black and whites and are not as clear or vivid as one would have liked, but what they offer is scale/proportion in relationship to the wearer. That last aspect is staggering at times if not jaw dropping when seen being worn by so many of these royals.

The next segment focuses more about the gems and the haute joallier that this family collected and commissioned during their reigns, as well as their provenance, which is extraordinary in every way. Again, seeing an image of a tiara on its own and then seeing it sitting atop a head certainly changes one’s perception, perspective, and reaction to each piece. It also illustrates the incredible sizes of the gemstones that were used to build these exquisite pieces created by the heritage masters of fine jewelry.

The last section about Prince Dimitri and his creations, while wonderfully photographed, lacks the one thing that might have made this chapter much more thrilling and that would have been scale, or to see them on a human or shown in comparison to a familiar object and not just show on a page. What struck this reader is that on the opening page of this segment, the Prince clearly states “proportion is always a key element” or in other words scale, and yet when you see a single ring on a page you have no clue as to the scale and proportion of said piece. Critiquing his creations is highly subjective, and since the book is far more dedicated to the past than the present the reader who will be the judge in that aspect.