Once Before Time: A Whole Story of the Universe 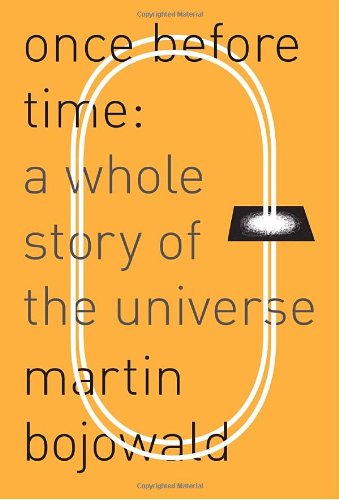 A physicist who writes a popularization of science takes different kinds of risks than the popular science writer. The popular science writer tends toward over-simplification, and only a few will notice. In contrast, a physicist writing for the popular market tends to either lose readers in too much detail or in too little explanation. Bojowald, an associate professor of physics at Penn State, tends to take risks of the second sort and assume too much of the reader in Once Before Time. Written in a compact, dense style, this is book is definitely not to be taken as light reading. To get the full measure, this book must be studied, read slowly and patiently.

Once Before Time is constructed of short chapters on a wide range of topics, some fact-based, others more speculative, a few whimsical, and a few that are outright science fiction—thankfully signaled to the reader by use of italics. As the topics tend to be disjointed in both overarching theme and clarity, the reader may be lost in one chapter, regain the bubble in the next, but lost in the one after. Here now are my (perhaps choppy) notes on decoding Once Before Time, where I think I understand what’s going on, or at least where my notes have some coherence.

Encountering infinity in solutions to equations indicates the limits of theory. The creation of the universe, the big bang, starts at a singularity, a point that mathematically represents infinity. Similarly the desire to merge Quantum theory with General Relativity results in infinities. Quantum Gravity as a theory may not only remove these infinities but also possibly provide a glimpse at what happened before the big bang.

The difference between hypothesis and theory is that hypothesis is speculative, generated at the beginning of an investigation, while theory has a higher level of maturity, hypotheses with tests and observations. Quantum Gravity is not quite a theory but more like a framework and while the frame for QG may be clear (to a few) the interior needs to be filled in.

Newton’s laws with respect to gravity have two flaws. The first is the how of what gravity does what it does, is explained as action at a distance. The second is the necessity that time, that gravity must act everywhere instantaneously. Newton’s flaws in this matter were corrected by Einstein’s theory of Special Relativity. Now it becomes “important to distinguish between properties that depend on the person making the observation and the properties independent of the observer.”

Newton’s laws survive though because of the extreme velocities needed to cause inconsistencies, inconsistencies that occur at close to the speed of light, 300,000 Km/s, which is available only to massless objects like photons. Time passes slowly at the speed of light. At these speeds, for an observer, time is transformed into space, and all time-like distances vanish.

How do we know this is so? Cosmic rays contain muons, heavy electrons that decay after one millionth of a second into an electron plus two neutrinos. This decay can be used as a fast clock to probe high velocities. That some muons enter our atmosphere, reach ground, and are detected, while all should have decayed by interaction with the upper atmosphere before reaching ground indicates that that space has been transformed into time!

The theory of Special Relativity doesn’t include gravitational force, while General Relativity (GR) does but its inclusion is contrived. The influence of gravity on space-time is usually weak and impossible to exploit technologically (except through science fiction as worm holes, warp drives, and mini black holes). Various experiments have been performed that prove GR. Mass causes space-time to curve causing the gravitational force on other masses to change. The change in curvature has to propagate to reach distant masses. That GR had been accounted for in GPS design enables GPS devices to work.

One prediction of GR is gravity waves, that space-time can be excited to vibrations. Gravity waves should be generated in the collisions of massive objects such as neutron stars and black holes, but only recently, as of 2005, has the math become tractable to design experiments to detect them. Detectors for gravity waves are being constructed now, and their detection may open a new branch of astronomy.

The limit of GR occurs in the singularity of black holes, and at the big bang. In a singularity, gravity is so huge that space and time vanish. At a singularity, the math equations of GR, which are comprised of differential geometry and differential equations, volume approaches zero. The result of dividing by zero is infinite density, and as a result Einstein’s equations fail. GR become unreliable as a theory. A theory of Quantum Gravity is not needed to explain observed phenomena; the motivation is to explain what goes on in singularities. A QP of gravity may be according to Bojowald, the one last hope to cope with singularities.

The two pillars of twentieth century physics are GR and quantum physics (QP). In the theory of QP, tiny objects are modeled as extended wave-like forms instead of point-like particles, and there is as yet no QP description of gravity. GR and QP have both been proven valid but are incompatible with each other.

The classical picture of the atom, prior to QP fails with the following question, “Why doesn’t an electron lose energy and collapse into a proton in a Hydrogen atom?” The answer is that an electron is a wave-particle that has no distinct surface. Outside its central region it “fades away.” As such an electron has no distinct position or velocity. Its position becomes a probability distribution. Its velocity limited to a fixed set of orbits, and the electron as a wave can be anywhere in those orbits. An electron doesn’t have to be strictly on one side of the proton at any given time. An electron can bring stability to an atom by repulsing itself! The quantum mechanical electron’s force counteracts energy loss from electromagnetic radiation and the atom/electron system is stable.

Bojowald introduces Planck length, on the order of 10e-35 meters; Planck time, the amount of time for light to travel one Planck length, 10e-44 seconds; Planck mass, 10 e-6 grams, and Planck density the equivalent of a trillion suns compressed to the size of a proton. Theory has it that the universe near the time of the big bang was of Planckian density.

Measurement of heat radiation in a closed dark box at uniform temperature, called a “black body” radiator, was used in experiments in the 19th century. Classical theory says that energy summed over all frequencies should be infinite. Planck showed that black body walls cannot emit energy packets arbitrary, and so an infinite amount of energy is prevented. Perhaps the same mechanism holds true for the big bang.

The theory of Loop Quantum Gravity (LQG) was conceived in 1990 by Carlo Rovelli and Lee Smolin. In LCG, quantum theory is applied to space and time. Space is atomic and spatial atoms are abstract, one dimensional and loop-like. Loops represent the creation and dynamics of atoms of space, literally making space, its length, area, and volume are a woven fabric made of loops. Spatial regions can only grow in discrete steps by adding or exciting spatial atoms. The whole universe can grow in and of itself without an external source, and the denser the fabric, the more continuous space appears to be. As loops change connections they carry matter or signals with them. Their smallest volume of a loop is expressed in terms of the Planck length. The vacuum of LQG is emptier than what we consider normal vacuum, a state of infinite (rather than no) temperature, what Bojowald calls a “state of hell.”

Using the theory of LQG, time does not end at the big bang. There may be a prehistory of time not seen in General Relativity. LQG introduces the concept of discrete time where change happens only when meshed loops connect. LQG posits new repulsive forces when approaching the “state of hell” that would counteract the collapse predicted by the purely attractive force of classical gravity. Time is now a lattice, which can absorb a lot of energy but not an infinite amount, stopping collapse and turning it into expansion. To retain coherence with classical theory, for a large universe of low energy density LCG’s discreteness of time becomes unimportant.

The complexity of LQG equations prevents solving the fundamental questions of the cosmos. The missing element to solving LQG equations is “covariance”, that is the “results obtained from solutions must not depend on what time is used for ordering” of equations. No covariant formulation of computations for LQG has yet been achieved, however approximate models that assume covariance can be used to unravel some properties of the big bang.

Cosmic inflation began at an early stage of the universe, and accelerated expansion created all matter now present, like a tsunami wave coming out of a vacuum. Most physicists agree on an inflationary model of the universe, that the universe expanded rapidly early in the very hot phase but there is a contradiction. Rapid expansion conflicts with the attractive nature of gravity.

No direct observation of the big bang is possible. The earliest moment visible to us occurs after 380,0000 years of expansion. Prior to that, the universe was just too hot and opaque because of that hotness, like attempting to see below the surface of the sun. Traces of the big bang however may be found in neutrinos and gravity waves. Neutrinos are electrically neutral, having no mass and such weak interaction with matter, can travel through the earth. Due to their weak reaction, neutrinos can reach us from much earlier times than light, all the way back to just one second after the big bang. All we need is a “fantasy” neutrino telescope to see them.

At best we can determine the boundaries of our ignorance of the matter—what can be known given what we do know. What can a model do? How reliable are the results? Bojowald states that the infinite worlds hypothesis is an abuse of infinity, that any theory about space and time must be consistent with what we can observe of the universe. What can be modeled reliably are energy densities and temperature, and so cosmological insights must come from (1) measurements of the cosmic background radiation, (2) wide-ranging mappings of matter in large scale in galaxies, and (3) distances and velocities of violent star explosions.

Space has positive curvature, which has gravitational force on light and on microwaves, though the space we live in is nearly flat on the large scale. The measured values of curvature cause a problem that as of yet can only be solved by postulating new forms of matter and energy (dark matter, dark energy) with no good theory as to what it is made of.

Bojowald goes on to speculate on the nature of dark energy, gamma ray bursts, the nature of black holes, event horizons and the possibility of naked singularities (black holes without event horizons), and “cosmic censorship” which prevents nakedness. Bojowald also speculates on the nature of time, creation myths, the theory of theory, the politics of research, and the theory of everything. Perhaps Once Before Time may be summed up best with a quote relayed through Bojowald from Wittgenstein, “It is not how things are in the world that is mystical, but that it exists.”