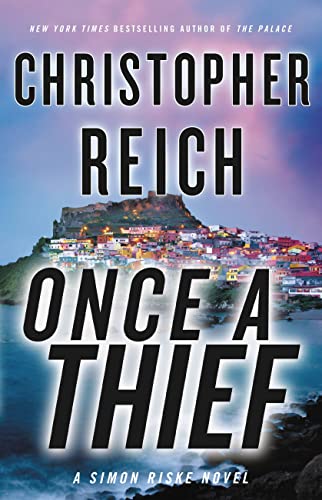 “Once a Thief is a good read and moves at a good clip. Reich’s readers who are fans of his previous Simon Riske books will enjoy this one and will look forward to Riske’s next adventure.”

In Christopher Reich’s new thriller, Once a Thief, we meet three major characters: Simon Riske—"not a trained spook, exactly, but maybe something better. A man not bound by any rules. And he had that extra thing, the thing no one could teach. He was motivated.”

Sylvie Bettencourt, a woman whose background and training in Russia is dubious and whose goal was to “move money from Russia—newly, rabidly capitalist—into England, to use the international financial system to launder funds . . . during the first big grab following the dismantling of the Soviet Union.”

And finally, Anna Bildt, the daughter of a bank manager, deeply involved in the money laundering scheme in which a man is assassinated in a car bomb explosion. It is Anna’s goal to find the people responsible and bring them to justice in whatever form that entails.

Three characters who are destined to meet and each determined to achieve their own goals.

Riske is established as a professional automobile restoration expert but who has a “side hustle” as well. Reich does an extremely good job of moving Riske through the task of gathering information on Bettencourt for the US government in a take-down sting.

The story follows the relationship between Riske and Bettencourt as it develops into one of not quite trust, but dependence on each other in order to achieve their individual goals.

Anna Bildt’s role in the story is slower in developing relationships with each of the others, but Reich is clear as he moves her closer to discovering the persons responsible for her father’s murder.

This is a story with myriad twists and turns through various international scenes. Reich’s descriptions of these many locales are clear and visual. The same can be said about his portrayals of the characters. Their personalities are well developed, and the reader fully understands how each character moves through the story.

Reich weaves multiple characters throughout the story, and at times it is difficult to remember who is who, but the designation of bad guys and good guys is well-defined. There is no doubt about who to cheer for and who needs their comeuppance.

Reich places Riske in many scenes where he gathers information and sends it off to his contacts in DC, but in many of these instances it almost feels that getting the material is too easily accomplished. Although the description of his task is well written, there is often little or no confrontation. Riske just gets into the appropriate place, gets the information, sends it on to his contact, and leaves.

The reader is also presented with a somewhat disappointing and all too convenient ending. No spoiler here. On the whole, however, Once a Thief is a good read and moves at a good clip. Reich’s readers who are fans of his previous Simon Riske books will enjoy this one and will look forward to Riske’s next adventure.