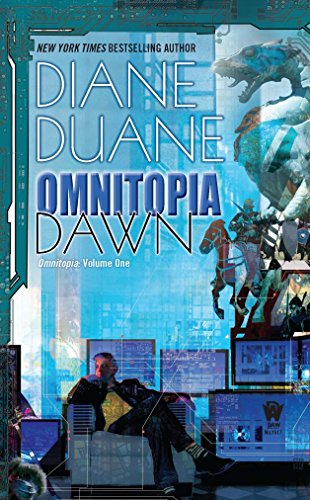 Omnitopia Dawn has a compelling concept—a massive multiplayer online role-playing game, an MMORPG, has an important upgrade and reaches the near-mythical point of complexity that lets it transition to sentience. An amazing idea! A whole universe of fantastical worlds inhabited by real, ordinary humans, wakes up!

Unfortunately, the book has the same downside as watching someone play World of Warcraft or Everquest without actually playing yourself: it’s gorgeous to look at, but slow and lacking in active involvement most of the time. There are far too many characters, so none of them have much to do for most of the book. In fact, even into the halfway point of the book, new characters are still being introduced until there are whole staffs of improbably chic, big-business higher-ups who once were lowly geeks. Most of them feel largely interchangeable on both sides of the mostly dull and slow corporate intrigue.

The best parts of the book are the parts in-game, where the new, immersive, full-sensory technology makes the game world feel as real as any well-drawn fantasy world, a perfect amalgam of all the best MMORPGs currently on the market, extrapolated to the logical extreme that five or so years in the future might bring.

But the world and most of what happens inside it, is secondary through most of the book. Where there should be tense scenes of battle and exploration, literal world-building and discovery, there are instead long scenes of people in board rooms, phone calls about stocks and shareholders, and confusing multi-part conversations that are basically info-dumps for those who don’t know the business of gaming—and they manage to not make it interesting. It winds up feeling a little like the author doesn’t trust the reader enough to just cut to the chase.

This is the first book of the series, and so a certain amount of talkiness and defining is expected, but much of the book feels like wheel-spinning—as if it’s waiting for the real story to start—which apparently isn’t until almost the end of the book. It makes the read less compelling than it should be. The story feels backward—it would have been faster, more to the point, and far more involving to have the story set primarily in-game, leaving all the business and boardrooms as quick interludes, or better yet, as only quick mentions.

In the end, though, the book almost justifies all the info-stacking. The second-to-last few chapters are as vital, tense, and interesting as we could have hoped the rest would be, and they’re situated inside the world of the game, where the final showdown happens—as is only appropriate for a story about a gameworld.

Omnitopia Dawn is not the most riveting first volume of a new series, but t does make the reader wonder what comes next.