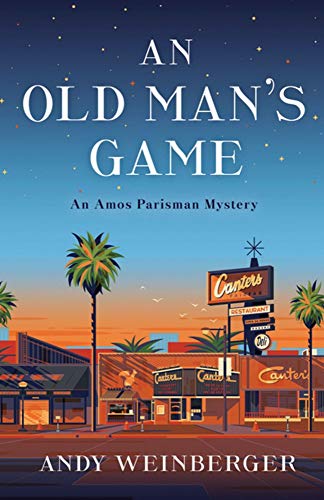 “An Old Man’s Game doesn’t just offer light entertainment, though there is plenty of that. It also offers plenty of stick-to-your-ribs-food for thought on Israel, anti-Semitism, Zionism, Jews, and Palestinians.”

“This is not Dostoevsky,” Andy Weinberger says of his new, Jewish novel, An Old Man’s Game, to a packed house at Readers’ Books in Sonoma, California. He also says—this is typical of his humor—that his late wife, Lilla, “was to blame for this book.”

In the Acknowledgments at the back of his murder mystery, which is set in Los Angles, Weinberger thanks friends, family, and especially Lilla. “This is for you,” he writes. That’s no joke.

It should come as no surprise that Weinberger has written a murder mystery that’s set in L.A., the city that he knows better than any other including New York where he was born. It’s his first novel, and, if it proves anything, it’s that you’re never too old to write a work of fiction. Weinberger himself isn’t an old man, but he’s getting there slowly but surely and with an irrepressible sense of humor.

If An Old Man’s Game is about anything in particular it is about L.A. Jews, who are different than Jews anywhere else in the world, and also very much like their kindred in New York, San Francisco, and everywhere there’s a synagogue. They are creatures of their tangled history, and they are capable of anything, good, bad and ugly, as Clinton Eastwood would say.

Weinberger’s detective, Amos Parisman—the old man referred to in the title of the book—speaks some Yiddish, which adds spice to this tale of crime and its detection in and around a synagogue where an unorthodox rabbi named Ezra dies while eating matzo ball soup.

It’s true that An Old Man’s Game is not Dostoevsky. But it might be called a “poor man’s version” of the classic Russian novelist.

Parisman is a kind of “Paris Man” in the sense that he is urbane, witty, and charming in a Jewish, tough guy L.A. way. Unlike Raymond Chandler’s detective, Philip Marlowe, Parisman doesn’t walk alone down mean streets, or become romantically involved with the suspects he investigates. He’s married.

Fearless and curious, he covers a lot of L.A. territory, some of it grimy, on foot and by car and in the process meets a cast of strange and wonderful Jewish and non-Jewish characters: a doctor, a lawyer, a veteran of Iraq, a police chief, a lesbian, a young student of ancient holy books, and an ex-con named Omar who provides backup and serves as a Latino sidekick.

Amos tells the story and provides a window on L.A. At times, he can be opinionated and a loudmouth. One might call him a liberal, California version of Archie Bunker. Weinberger has sprinkled satire and a wry sense of humor on almost every page. “If you live here long enough,” he says of L.A. “you can drive without having to think.”

He has also made Amos Parisman into a keen observer of L.A. landmarks, including Musso & Frank, which he describes as “as a classic chophouse” where “obsequious waiters stroll around in red uniforms and bow ties,” and where the detective eats steak and fries, while his cop pal enjoys spaghetti and meatballs.

An Old Man’s Game doesn’t just offer light entertainment, though there is plenty of that. It also offers plenty of stick-to-your-ribs-food for thought on Israel, anti-Semitism, Zionism, Jews, and Palestinians.

For those who don’t know Yiddish and want to learn, there’s a glossary at the back of the book with a list of Yiddish words and their English translations. “Farblunget” means “broken-down, wasted.” That word describes the detective himself who suffers from a variety of ailments that waste him, though he shuffles along and solves the mystery.

At the launch at Readers’ Books, Weinberger said of his novel, “I don't know how commercial it is.” He soon found out. The cash register sang while he sat at a table, autographed books, and did what he has done for decades at the store: kibitzed with customers.

Not surprisingly, it’s a best seller in one of the best little bookstores west of the Mississippi. An Old Man’s Game is the first in the series. Like Andy Weinberger, Amos Parisman will be around for a while longer.