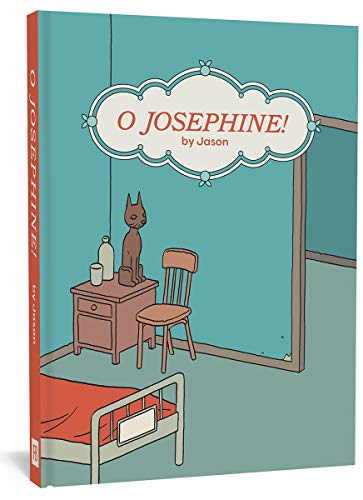 Norwegian-born comics writer and artist Jason is the king of understated humor. His books include not only deadpan and frequently obsidian black humor, but they are also chock full of references to the author’s favorite musicians, movies, and writers. O Josephine!, Jason’s latest graphic novel, is no different.

For those new to Jason, this book is a good place to start as any. After all, Jason’s work is standalone all of the time, and chronology and story arc are never issues. The first story in O Josephine!, “The Wicklow Way,” recounts the author’s hiking expedition through the Irish countryside between Wicklow and Dublin. It is reminiscent of On the Camino, Jason’s previous effort, which details another hiking trip, this time in Spain. “The Wicklow Way” features a slice-of-life story told in black and white. The author and hiker Jason is as milquetoast and the Irish and German strangers he meets, all of whom are depicted with dog faces. (This is Jason’s motif.) Besides walking, the main theme in “The Wicklow Way” is Jason’s love of Guinness beer and chicken salad sandwiches.

The oddest story in this collection is the second tale, “L. Cohen: A Life.” The Mr. Cohen of the title is none other than Canadian singer-songwriter Leonard Cohen. However, this is no ordinary graphic biography. The Leonard Cohen in Jason’s tale is a poet, novelist, a music student of Frederico Garcia Lorca, a pornographer, and a chess master who once bested Fidel Castro in Havana.

In between moments of great historical importance (Cohen meeting Hank Williams, Cohen meeting Brigitte Bardot), non-sequiturs appear in the form of odd asides, such as “Cohen eats lutefisk for the first time . . .” and “He [Cohen] buys a green raincoat.” The oddity of “L. Cohen: A Life” is magnified by the story’s heavy use of yellow—the only color that appears in this volume besides black and white.

“The Diamonds” is a bit of a head-scratcher, as it weaves multiple narratives into one noir-like tale. Ultimately, the story seems to be about a pair of private eyes spying on a wealthy man’s potential son-in-law, while, concurrently, one of the P.I.s has to deal with a junkie son in desperate need of money.

The final story, “O Josephine!,” is melancholic. Its main character is Emperor Napoleon Bonaparte, who has somehow been transported to Jazz Age Paris. There, Napoleon falls in love with American dancer Josephine Baker, but their tumultuous love affair ends in multiple deaths and loneliness for the “Little Corporal.” Added to the mix is also a bizarre cat statute.

O Josephine! is the perfect Jason graphic novel: short, stoic, and surreal. Reading Jason feels like you are always missing something, and there’s nothing wrong with that. O Josephine! is no different, and this volume, along with Jason’s entire oeuvre, shows what can be done with the comics medium when the focus is not on muscular men, women, and aliens in colorful, skin-hugging tights.