The Nutcracker: A Papercut Pop-Up Book 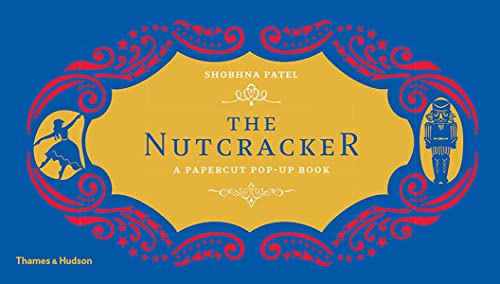 “a beautifully crafted book that gives readers a fresh look at a classic, beloved story.”

’Tis the season for introducing new holiday-themed books. This year Shobhna Patel, a British paper-cut artist, paper engineer, and illustrator, gives us her pop-up version of the Nutcracker story.

Renowned for her elegant, intricate laser-cut paper scenes, Patel has invented a new paper engineering technique she calls “paperscope” that adds a new dimension to her work. In The Nutcracker, the first published book to feature this new technique, four pop-up paperscopes depict key scenes from the story.

To see them, the readers must press down on the outside fold of two joined, heavy stock papers. The downward pressure opens the laser-cut pages to reveal the highlighted moment in the story, which is framed on either side by complexly cut images illustrating story and character details.

The first paperscope features the Nutcracker as the central figure, with Clara and Herr Drosselmeyer depicted on the opposite framing sides. Toymaker Drosselmeyer clearly is proud of his hand-carved gift, and Clara reaches out to the handsome Nutcracker in pure delight.

The third takes readers to the magical Land of Sweets, where the Nutcracker-Prince and Clara dance in the shadow of the candy castle.

In the last paperscope, it’s Christmas morning and the magic of the night before has ended. Clara holds her toy nutcracker high, loving her gift and savoring her nighttime memories of helping the Nutcracker win the battle against the Mouse King and his army, of the magic snowflakes that transformed the wooden toy into a handsome human prince, and of their enchanted journey together in the flying sleigh to the Land of Sweets.

Patel’s paper skills are superb (she graduated from art college with a First Class honors degree in graphic design in 2012 and was given the “Most Outstanding Artist” award). Her images enchant, enthrall, and provide fresh insight into each subject.

In addition, she has a great sense of design. Charming illustrations done in a limited color palate of blue, red, and gold decorate the top and bottom margins of each page. Drawn in the style of 1930s Eastern European children’s book illustrations, they transport the reader to a different place and era.

Patel also tells the story well, painting word pictures of the events. She likens the jewelry that adorns the women’s gowns at the Christmas party to glistening “stars against the night sky.”

Thanks to her description, we can visualize the castle sitting atop the rock cake mountain in the Land of Sweets, “. . . golden caramel walls were intricately decorated with hand-piped icing and multicolored gum drops that sparkled like precious gems. A grand, stained-glass window made from boiled sweets glinted above its doors.”

Patel’s masterful presentation of the story is slightly marred by the careless work of proofreaders. There is a mixture of British and American spelling (Clara retires to her “cosy, warm bed” (cozy in America), yet there are multicolored gum drops (British would be multicoloured gum drops, and in America gumdrops is one word). More egregious, we read, “Next, came the tranquil tune of bells and an oud [sic].”

The first edition of this book, with its groundbreaking paper engineering, is likely to become a collector’s item. Perhaps the proofreading oversights, which we hope will be corrected in subsequent printings, will enhance the book’s value in the same way that that the Inverted Jenny stamp, which was accidently printed with the airplane upside down, is highly prized.

Despite the proofreading mistakes, this is a beautifully crafted book that gives readers a fresh look at a classic, beloved story.