Number One Is Walking: My Life in the Movies and Other Diversions 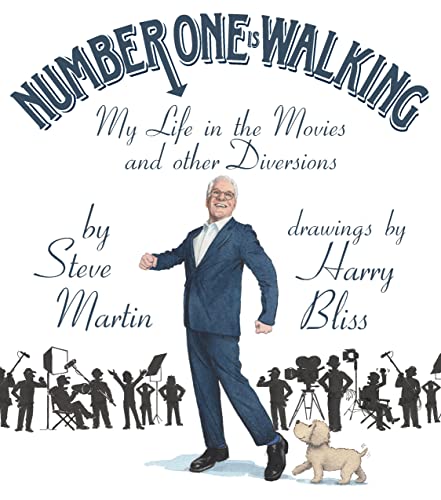 Want to read what is essentially a graphic novel about Steve Martin’s career? If so, Martin’s latest book Number One Is Walking: My Life in the Movies and Other Diversions is here for you.

Martin already has a memoir out there (Born Standing Up) so maybe he thought this would give him another bite of the apple. At this point in his career, he seems to be one of those retirees who wants to work but not too hard. He even alludes to this saying: “Fifteen years ago, I quietly eased into lower-profile and less-costly endeavors.”

He lists banjo playing and writing songs as examples but also mentions Only Murders In the Building, his streaming TV series. And he’s right. Only Murders is cute and diverting but nowhere near as polished or good as some of Martin’s classic films like Parenthood.

This memoir seems to be part of Martin’s “lower-profile” offerings. Along for the ride is Harry Bliss, a noted cartoonist with whom Martin did a previous book—A Wealth of Pigeons.

This book is a graphic retelling of some Martin anecdotes that one suspects he’s been dining out on for years. One of them is about the time he was acting in the limited run Waiting for Godot and he wound up at a party in Jackie Onassis’s Fifth Avenue apartment. Jackie tells Martin she wanted to see the play and he naively informs her she’d better hurry because tickets are selling fast. Her response: “Oh, I think I’ll be all right.”

The drawings by Bliss are amusing and perfectly compliment Martin’s stories, which are mostly about the movie business. This is a slight book, and one doesn’t want to take away from the few stories inside. You could easily read his in an afternoon.

When Martin is not telling stories about his films, he’s dishing about co-stars like Lily Tomlin, Chevy Chase, and Martin Short. He also has a soft spot for departed stars John Candy and Robin Williams.

None of the cartoon stories go on very long. At most they are five pages long. They’re funny for sure but very minimalistic. The reader might wish Martin felt like working a little harder or digging a little deeper.

It’s hard not to feel like Martin is coasting here, especially in the second half, which is when the reader discovers what the “other diversions” in the title actually means. For the most part, they are one-page jokey comics like you might get in the New Yorker if the New Yorker cartoons were more understandable. No reader will be scratching his or her head here. The humor is very broad such as the panel where a woman is sitting in front of a psychic who asks, “So what brings you here today.”

One can almost hear the rim shot from the band.

This book or some might say half-book, is being released right before Christmas, likely in the hopes that it will become an interesting gift for the Steven Martin fan in your family. And it might. It’s just that it’s hard to justify the $30 price tag for what feels like a coffee table book that might work better as a coaster.