Nuclear Folly: A History of the Cuban Missile Crisis 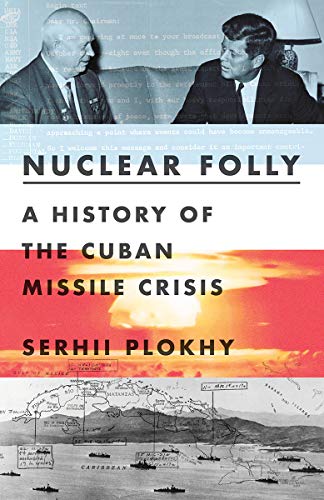 “Plokhy writes that instead of mastery and clear-headedness, President Kennedy and Soviet leader Nikita Khrushchev ‘marched from one mistake to another’ during the Cuban missile crisis.”

The 1962 Cuban missile crisis is one of the most studied and analyzed events in history. It was the most dramatic showdown between the United States and Soviet Union during the Cold War. It has been the subject of popular movies, self-serving memoirs, and propaganda by Kennedy court-historians anxious to perpetuate the legend of “Camelot” by depicting President John F. Kennedy as a master of crisis management.

Arthur Schlesinger, Jr. described President Kennedy during the crisis as “coolly and exactly measured,” moving with “mathematical precision,” demonstrating a “combination of toughness and restraint, of will, nerve and wisdom, so brilliantly controlled, so matchlessly calibrated . . .” Robert Kennedy added to the myth of his brother’s skillful crisis management in his book Thirteen Days (which was released in 1969, a year after Robert’s assassination).

Serhii Plokhy, the director of Harvard’s Ukrainian Research Institute and the author of numerous books on Russian and Soviet history, begins Nuclear Folly, his new history of the Cuban crisis, by debunking the “often self-serving and inaccurate” portrayal of the crisis in Robert Kennedy’s book. Plokhy also refuses to accept the still dominant narrative of US historians and presidential scholars that credits President Kennedy and his advisers with masterful crisis management and clear-headed decision-making.

Plokhy writes that instead of mastery and clear-headedness, President Kennedy and Soviet leader Nikita Khrushchev “marched from one mistake to another” during the Cuban missile crisis. The mistakes, he writes, “were caused by a variety of factors, from ideological hubris and overriding political agendas to misreading the other side’s geostrategic objectives and intentions, poor judgment often due to the lack of good intelligence, and cultural misunderstandings.”

The Kennedy-Khrushchev relationship began indirectly during the 1960 presidential campaign. According to Plokhy, Khrushchev ordered the KGB to help Kennedy’s campaign because he viewed Kennedy as “less tough” than Republican candidate Richard Nixon.

A KGB officer posing as a Soviet journalist met with Robert Kennedy, who said if his brother was elected “better relations could be established.” During the campaign, Khrushchev reinforced candidate John Kennedy’s false claim that there was a “missile gap” that favored the USSR.

After the election—which Kennedy won by a razor-thin margin helped by voting irregularities in Texas and Illinois—Robert Kennedy in December 1960 on behalf of his brother discussed with the same KGB “journalist” ways in which both countries could accommodate each other over a nuclear test ban, Berlin, and China. Plokhy notes that in today’s parlance, this activity would “qualify as nothing less than ‘collusion’ between Kennedy’s presidential campaign and the Kremlin.”

The backdrop to the Cuban missile crisis included the failed Bay of Pigs invasion—planned during the last days of the Eisenhower administration and executed poorly by the new Kennedy administration—the Kennedy-Khrushchev summit meeting in Vienna, and the construction of the Berlin Wall. All three events convinced Khrushchev that Kennedy was inexperienced and weak.

This produced what Plohky calls the “red gamble”—Khrushchev’s decision to secretly ship to Cuba nuclear missiles, tactical nuclear weapons, nuclear-capable bombers, and large numbers of Soviet troops. Khrushchev knew, despite the “missile gap” rhetoric of the Kennedy campaign, that “the American and Soviet nuclear missile arsenals were unequal. He had virtually no rockets capable of reaching the United States to serve as a deterrent” to America’s formidable strategic arsenal.

The plans for Operation Anadyr were approved in June 1962. It was, Plohky notes, “the first deployment in history of Soviet missiles outside the USSR.” The Soviets first sent antiaircraft missiles to Cuba—defensive weapons that Soviet officials hoped would help conceal the subsequent shipment of offensive nuclear missiles. Khrushchev also played what Plokhy calls his “Berlin card” to distract the Kennedy administration from developments in Cuba.

During this time, Plokhy notes, US Attorney General Robert Kennedy continued to oversee the administration’s efforts to overthrow the Castro regime in Cuba—codenamed Operation Mongoose. As Soviet military shipments to Cuba proceeded and increased, Robert Kennedy suggested that US forces stage a Cuban attack on the US military base at Guantanamo Bay to provide a pretext for invading the island and overthrowing the Castro government.

CIA estimates of Soviet arms and men being sent to Cuba were consistently wrong. The first medium-range ballistic missiles landed in Cuba on September 9, 1962. The first nuclear warheads arrived in Cuba on October fourth. The launchers for those missiles were combat-ready on October eighth. CIA sources provided information that the missiles had arrived, and that was confirmed by a U-2 flight’s photographic evidence on October 14th. The CIA estimated that there were about 8,000 Soviet military personnel in Cuba; in fact, there were 40,000.

Plokhy details the so-called “ExCom” (Executive Committee of the National Security Council) meetings that occurred daily at the White House during the missile crisis, as well as Khrushchev’s relevant discussions with top Soviet political and military leaders. At ExCom meetings, President Kennedy initially sided with the “hawks” and favored an air strike to take out the missiles before they became operational. Later, he sided with the “doves” who favored trading U.S. missiles in Turkey and Italy for Soviet missiles in Cuba.

Robert Kennedy, who portrayed himself in Thirteen Days as a moderate, calming voice in ExCom’s deliberations, was in fact a superhawk “calling for an invasion whether that might cause a nuclear war or not and proposing to sink an American ship or stage an attack on the Guantanamo base to justify an invasion.” He initially viewed the blockade option as too weak. He even proposed threatening Khrushchev with the transfer of nuclear warheads to the West German government.

Eventually, a deal was struck. Publicly, the Kennedy administration agreed to refrain from invading Cuba in return for the Soviets removing the nuclear missiles and bombers from Cuba. Privately, Kennedy agreed to dismantle US medium-range nuclear missiles in Turkey—a NATO ally—at a future date. This was no great “victory” for the United States as it has repeatedly been portrayed.

Some observers have viewed the Cuban missile crisis as an American defeat. Shortly after the crisis faded, James Burnham criticized Kennedy for acquiescing in the continuation of a communist regime in Cuba. In 1987, columnist George Will wrote that the missile crisis effectively killed the Monroe Doctrine, leading to subsequent communist victories elsewhere in the Western Hemisphere. And British historian Paul Johnson opined that given the U.S. strategic, conventional and geographic advantages at that time, Kennedy should have insisted on a neutralized, disarmed Cuba.

A year after the Cuban missile crisis, John Kennedy was assassinated. And in the following year, Khrushchev was removed from power by his Politburo colleagues.

In the end, Plokhy concludes, what prevented nuclear war from breaking out was the mutual fear of nuclear war. “The crisis did not develop into a shooting war,” he writes, “because Kennedy and Khrushchev both feared nuclear weapons and dreaded the very idea of their use.”