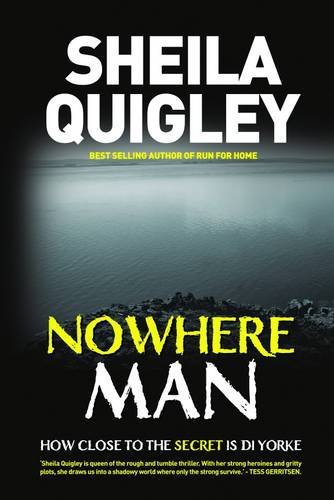 “Crime noir doesn’t get more powerful than this.”

A family that rules the world. A group of women no one would suspect. A diabetic girl on the run. A detective in turmoil. DI Mike Yorke never mixes work and play, but his latest case on Holy Island has come a little too close to home.

Aunt May is in a coma. Street kid Smiler is seeing doom at every turn. Childhood friend Dave is obsessively praying. The drugs factory has been broken up, the enslaved children rescued and the monastery restored to the monks. Mike should be moving on to the next case, but the horror of that night won’t leave him alone.

DI Mike Yorke (Thorn in My Side) is back in Sheila Quigley’s riveting new crime thriller, Nowhere Man, her 10th novel, and the second in her critically acclaimed, bestselling Thorn series.

The book starts violently with a hard-hitting soliloquy from Shelly Monroe, a woman repeatedly raped, and then left for dead. Be warned. It’s not for the fainthearted:

“She remembered how she’d suffered at the hands of his servants, how they had raped her repeatedly. She saw him leaning over her, smiling, his stinking breath in her face. As he slashed her throat, and how he had said sarcastically, ‘Goodbye.’
Yeah, I’ll goodbye you. Really I should be dead, but this dead bitch has been given another chance. A chance to wipe you scumbags off the earth. ‘I know where you’ll be!’ she muttered, surprised she could talk at all. ‘And I’m coming!’”

These are not idle words, and it’s not too long before Shelly starts applying her own form of justice, with an eye for an eye. Literally.

Those readers not accustomed to realism in modern day crime fiction may find parts of Nowhere Man uncomfortable reading; but that’s what makes great noir writing: pushing the boundaries of the norm. And even though this is a DI Mike Yorke book, ultimately it becomes Shelly’s heart-wrenching story.

In Britain, Ms. Quigley has been hailed as the Grande Dame of gritty Northern crime, and it’s easy to see why after reading Nowhere Man. She skillfully interweaves the various threads of this violent and volatile story with narrative verve and commanding prose.

Crime noir doesn’t get more powerful than this.

Readers looking for a unique and bloody slant on crime fiction should pick up this totally addictive and unfailingly entertaining series and quickly add it to their holiday wish list.