Nowhere Girl: A Memoir of a Fugitive Childhood 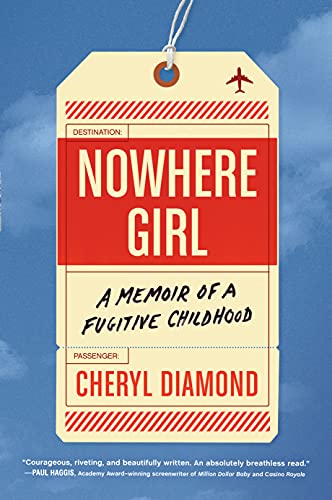 Like Tara Westover’s Educated, Cheryl Diamond’s memoir tells the harrowing story of how crippling a childhood can be under the despotic narcissistic rule of a controlling father. Diamond’s father is a different kind of survivalist than Westover’s, but what they have in common is a powerful hold of loyalty and love over their daughters despite their cruel, abusive behavior.

While Westover eventually finds her freedom through books, through education, Diamond finds in from deep inside herself. Along the way, she takes the reader on a gripping ride of constantly fleeing from country to county. What has her father done to merit such extreme evasive precautions? What risks does he face if caught? And who is chasing him anyway?

The answers to these questions don’t live up to the breathless tension of an outlaw life, a let-down after all the build-up to the mystery. What remains, however, is more important: Diamond’s powerful descriptions of life on the run, living lie after lie, and the corrosive effect this has on her and her family. Each chapter is headed by Diamond’s age and current place of residence, starting with the vivid memories of a four-year-old:

“I hear Dad register under a different name than the one we used at our last stop. His favorites include Cash, Sterling, and Gold. It can never match the name in our blue passports, the five of which Dad keeps on him at all times. I know it’s all so we don’t leave a trail, although why that’s important isn’t clear to me. It’s so ingrained that I never question it. The same way I know to be silent at all times when around immigration officials, border security, or anyone even vaguely resembling a cop. I know my father’s laws by heart, because it’s what we all believe. Always be loyal to our family . . . Trust no one . . . And be a criminal—but be a noble one. These are the rules we live by. An unbreakable outlaw code.”

It’s no surprise that Dad turns out to be not such a noble criminal. And the family loyalty he touts so loudly turns out not to be the Holy Grail his daughter thought. Getting to these discoveries, the dawning awareness that rises up in Diamond provides the true core of this story. Along the way, she pays a heavy price, fighting hard to keep her family together, pushing herself to be the perfect daughter who will finally earn her father’s love and approval. It’s a need so familiar as to be a cliché of memoir, but Diamond does a good job of showing the spell her father weaves.

There comes a point in the family’s travels when the father decides his family should become Jewish. Not out of admiration for the religion or history (that he reserves for the Sikh faith he brings up his three children in), but out of one of the ugliest and oldest canards of anti-Semitism.

Diamond, sadly, doesn’t bring to bear any adult wisdom to her descriptions of this, as she does in other instances of her father’s bad choices. By not doing so, she lets stand unquestioned her father’s reasons. There’s no “conversion” process here, of course. The family simply takes on a “Jewish name” and identity, the kids are sent to a Jewish day school, the family joins a synagogue—Diamond is even bat mitzvahed. All because “Dad stumbled across the idea that Jewish people dominate the world financial markets.” An active gold trader, the father wants access to this cabal. Here’s hoping readers don’t take the father’s reasons as valid, but it’s worrisome that some might. And Diamond has done absolutely nothing to correct the insidious assertion, not even mentioning how of course “being Jewish” doesn’t end up helping her father in his quest for financial power.

This is a big flaw in the book, especially now, as anti-Semitic attacks are on the rise and even members of Congress talk about Jews controlling lasers from space to infect the planet with Covid so as to profit from the vaccines their companies will sell. It’s disturbing that nobody in the editorial process thought to flag this, to provide some correction to the father’s anti-Semitic trope. Since they haven’t, this reviewer feels it necessary to do so.

Still, Diamond has a powerful story to tell, and she tells it well, creating strong characters and settings, describing the complicated motivations of her parents and older siblings, all while conveying her yearning for “normalcy,” whatever that is. As she watches other kids her age, she thinks: “I suppose it all boils down to this: I know how to survive and they know how to live.” This contrast with normal life, normal skills, runs deep through the book. As cracks in her family erupt, she writes:

“I look at the door to the room of the sister I despise. And just steps away, the door to the mother I must protect. Below is the father I adore and fear. And outside is a world I don’t really know or understand. What normal people do, and what they might do to me is beyond my range of experience. I only know how to wow them or con them.”

Diamond’s story is one of the family as oppressive, controlling cult. The tension isn’t whether the father will be caught by whomever is chasing him, but whether the daughter will break away from the web of lies that have been woven tightly around her. How does one recognize truth from fiction? And how does one escape one’s childhood? Diamond raises as many questions as she answers, as the best books do.