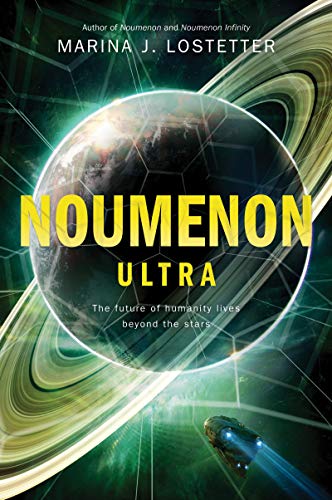 “Noumenon wasn’t just a place for subdimensional sentients to visit. It was so much more. . . . If the Ancients’ original intent can’t be determined and restored then the fabric of space-time may itself rupture.”

“Noumenon wasn’t just a place for subdimensional sentients to visit. It was so much more.” Reality turns out to be much more, too, involving multiple universes and subdimensions across which characters travel. This final book of Marina Lostetter’s Noumenon Trilogy takes us back to the ostensibly barren planet created long ago by an ancient alien construction called The Web.

The ships of the Noumenon convoy and the Inter Convoy Computer artificial intelligence (I.C.C.) that lives within it, were left to watch over the planet. Deep inside an alien mountain range they have lain dormant for eons. Now, after a hundred thousand years the AI is awakening. Something is roaming the convoy’s halls, and that something isn’t human.

Noumenon is too young and violent a planet to have evolved intelligent life. Its surface is bombarded by unusual meteors. Crystal trees abruptly shoot up from the bedrock. Its solar system is surrounded by an alarming space–time anomaly. So where did these visitors come from? What do they want?

in Kantian philosophy a noumenon is a “thing in itself” as distinct from a thing knowable through the senses and its phenomenal attributes. In the book multiple modes of communication are at play. Some species communicate mind-to-mind,  the Kali “able to hold multiple conversations in multiple languages at once.” There is also an alien kind of sign language, clumsily expressed in non-standard typography in the book.

Gene switching among creatures is common, too, resulting in physical and mental modifications. A “Dual-Possession” is a Noumonian body paired with a Petratheem consciousness in addition to its own.

After many pages first contact is made, but understanding is slow. The same might be said for the reader. Part of the challenge of this 560-page work is its back and forth in time, large cast, and changes that take place over 100,000 years. Over the millennia-long span of the trilogy the author shows their evolution. The I.C.C is the unifying character, involved with all the sentients and immortals as we move through space.

Noumenon was created and seeded by ancient aliens, and it becomes clear that their plans for it are unfinished, or at least that the Web megastructure is broken. Whatever it is creating has come to a halt, and now too many structures are failing. If the Ancients’ original intent can’t be determined and restored then the fabric of space-time may itself may rupture.

The I.C.C. reaches out to the descendants of its original crew, the remnants of Earth’s past both “in form and understanding.” The AI, the new lifeforms who have awakened it, and the remaining humans all embark together on an epic adventure to understand this new anomaly. What looks like destruction on a galactic scale is in fact the alien creators’ attempt at repair by targeting structurally weak spots in the galaxy.

“Noumenon is a ship meant to leave the universe for other dimensions, and the [ancient] Petratheem are its crew.” Why the confusion over their purposes? Simply that they are “a different life-form that don’t think like we do.” And so the characters depart one way for unknown dimensions.

Sci–Fi is typically an early venue to explore social issues, but Noumenon Ultra may feel too topically PC. Non-binary representations introduce a new singular-plural pronoun, “Im.” We are told that “different is never inferior,” and “If a social media platform amplifies disinformation, that means disinformation has become a part of its purpose.” The AI speaks in a colonial sounding patois rather than the conventional galactic standard that sounds like English.

The book is not light reading. There are so many strange worlds and beings outside the realm of the usual space opera that a glossary and other appendices are required. Numerous flashbacks and tangent detours likewise make it hard to keep track, plus, like the Norns in Wagner’s Ring, there are tedious retellings of the story by different creatures.

The ending is a long message of bromides to “the Revealers” of the subdimensions. It reads like an Ayn Rand soliloquy, lapsing into sentimentality before coming to a merciful close.