On the Noodle Road: From Beijing to Rome, with Love and Pasta 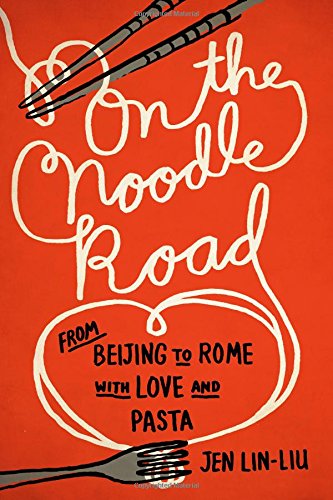 “. . . a fascinating exploration of some lesser-known corners of the Asian continent and a portrait of a marriage under extreme circumstances . . .”

Jen Lin-Liu has operated the Black Sesame Kitchen, a Beijing cooking school, for more than a decade. Only recently in her culinary experience did she stop to think about the origin of the noodle. The end result on that investigation is On the Noodle Road: from Beijing to Rome, with Love and Pasta, a book that is part travelogue, culinary history, and personal memoir.

Prior to marriage, Ms. Lin-Liu and her husband had experience traveling around the world for professional reasons. The marriage was also a combination of opposites. Her husband is a passionate outdoorsman (hiking, mountain climbing, etc.) and not that interested in foodways and folkways.

On the other hand, Ms. Lin-Liu runs a cooking school and is an ardent foodie. The quest to unravel the history of the noodle would involve traveling the couple to travel across the same route as the Silk Road, the legendary trade route that connected China to Central Asia to Europe.

Along the way, their marriage would be challenged by cultural and political hardships, but Ms. Lin-Liu would discover the historical, cultural, and political forces that shaped the nations along the Silk Road.

On the Noodle Road is divided into five sections dealing with China, Central Asia, Iran, Turkey, and Italy. Each section is supplemented with a map at the beginning and a list of recipes at the end. From the very beginning, Ms. Lin-Liu discusses the noodle-rice dividing line in China (noodles in the north, rice in the south).

This is similar to the dividing line in Europe with butter being the lipid of choice for northern European cuisine and olive oil predominant in southern Europe. Throughout the book the usefulness of the noodle becomes evident. A noodle, especially a stuffed noodle, is valuable to nomadic societies, since it is a foodstuff made from cereal (i.e. grains) that is cheap and portable.

Even today in American supermarkets, a consumer can purchase a box of pasta for around a dollar, and it will provide enough food to feed an average-sized family. (Unlike meat, a food product that can be hard to find, depending on the geographic region, difficult to preserve, and expensive.)

During her journey, Ms. Lin-Liu, a newlywed, finds out about the power of the mother-in-law in several Asian societies. In Central Asia, she witnesses their iron grip on the wife, dominating the situation by reinforcing the husband's will. This comes as a culture shock to the modern cosmopolitan.

Beyond the domestic sphere, Ms. Lin-Liu paints a picture of each nation, from the bland tyranny and corruption of Central Asian republics to the fear and repression of Iran. With the geopolitical broad strokes, she presents smaller portraits of families and individuals at odds with the media-constructed images American viewers see and hear on the news.

One is still surprised at the pro-American attitudes of ordinary people, kvetching about election rigging and meddling theocrats. (Actually not too different, attitude-wise, from most days on certain areas in American public life and in social media. Complaining about the status quo and the ineptitude and corruption of politicians and their clerical enablers seems to be a universal human condition.)

As she travels across the broadside of Asia, Ms. Lin-Liu encounters incremental changes in geography, culture, and cuisine. One stereotypically thinks of Europe and Asia as two irreconcilable monoliths, each mutually alien and incomprehensible. East is East and West is West, and never the twain shall meet.

In each section, she gives a capsule history and how this history effects the modern day situation. Each culture has its own folkways and foodways seen in the ingredients used in recipes. Across Asia there are two major cultures once one passes beyond China, these are the Persian and the Turkic cultures.

In previous centuries Persia (later Iran) and the Ottoman Empire (later Turkey) dominated the geopolitics of the region. The political tensions of Iran and Saudi Arabia go far back into history and are far larger than those presented by the political and economic interests of the United States. (Saudi Arabia, the Middle East, and North Africa are predominantly Arab, ethnically speaking, which one should not confuse with the catch-all term “Muslim,” since the Turkic and Persian ethnic groups are also traditionally Islamic.)

In the case of Iran, she tastes food with rosewater, pistachios, and saffron. The luxurious tastes run counter to the stereotypical images of Iran with its militancy and theocratic tyranny.

In Italy she discovers the sfoglina, a word meaning “female pasta maker.” “Luisa, a third sfoglina, taught me how to fold tortellini. . . . She rolled out pasta dough made of eggs and flour and cut them into small squares of less than an inch−the same as the size of manti wrappers in Turkey.”

By the end of her journey, Ms. Lin-Liu and her husband are negotiating how to come to terms with their careers and their personal lives. While she did not discover the origin of the noodle, her journey was one of self-discovery and cultural exposure. With a few bumps and scrapes, her marriage survives and both are determined to, in the words of Tim Gunn, “make it work,” despite the obstacles standing in their way.

On the Noodle Road is a fascinating exploration of some lesser-known corners of the Asian continent and a portrait of a marriage under extreme circumstances, but both the journey and the cuisine is worth discovering, especially to those fond of culinary travelogues.