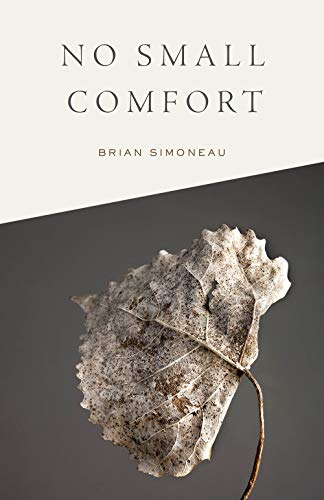 “an eminently readable, even compelling collection.”

Close literary observation of the natural world, what we might think of as the Robert Frost mode, has enormous poetic potential, but too often it becomes a retreat from the present. The waves of global anxiety, of political unrest and ecological terror, now seem too urgent for anyone, poet or reader, to rest in the gaze’s frozen moment. Yet the attraction remains.

Brian Simoneau’s second poetry collection, No Small Comfort, trembles uneasily on the frozen moment’s edge. His initial poem lies on the cusp between ice and terror. In “A Lake Opens Up Beneath Your Feet,” he writes of a sensation “Like the sound you imagine a bone / makes as it breaks if you never broke / a bone.” That first image sets the tone: safety has vanished, and after a long, peaceful interval, we plunge into the terror of the dark. The experience, for so many of us, is utterly new: “There’s no simile for such a sound—no / metaphor for thuds, thumps, crashes, passing / seconds contracting the space around / the brain.”

Climate change drives disasters, creating an emotion that Simoneau identifies as a fundamental grief. Each incident is a loss, and must be processed individually, as personally as the loss of a loved one. In “Record Flooding as a Metaphor for Grief,” he creates a list of negatives, all that is not, and cannot be named otherwise: “Not the risen water, not the raging waves, / but the basement slowly gaining back its shape . . . / . . . and nothing left to fill such a hole.”

Environment and emotion tangle, spewing startling metaphors, but the real power of No Small Comfort is the care Simoneau takes with each word. As the title offers both “not small” and “no comfort” in its negatives, each poem evokes a moment at once beautiful and terrifying. They move through the year by day, month, and season. Here is the reminder that the rush of events can only be lived moment by moment, regardless of the scale of history. Largeness is something to be glimpsed only briefly, as “unchecked wealth and recession, infinite stars expanding / to collapse.” In contrast, “April Fools” snowfall in spring becomes overwhelming in its insignificance: “Day by day this in and out / just breaks me down.”

Simoneau’s careful technique, his use of white space on the page, and his vivid language all create an eminently readable, even compelling collection. While No Small Comfort never focuses on contemporary traumas, they’re always present, a nagging at the back of the mind that keeps the book from slipping into preciousness or self-indulgence. Every poem is as sharp as Frost, a century and more later, frozen on the edge of apocalypse.