No Reading Allowed: The WORST Read-Aloud Book Ever 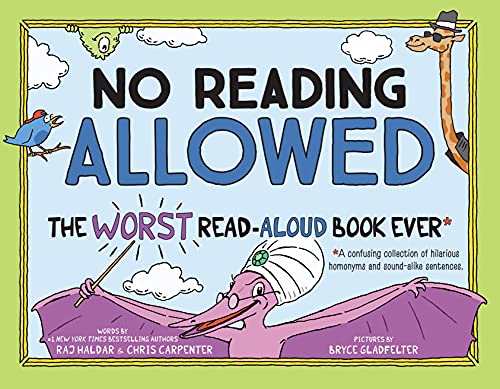 No doubt, Raj Haldar and Chris Carpenter had a ton of fun writing this silly book of a couple dozen or more sentences with homophones, homonyms, and tricky punctuations. After all, a love of language entwines every writer’s heart. Illustrator Bryce Gladfelter hits some homeruns with his lively artwork (Gary Larson would cheer the laughing sheep, with or without the wordplay). If you love language too, you’ll get some good giggles: “Stu . . . ? Where’s Stu when it’s time to eat?” and “Stu wears stew when it’s time to eat.”

Bryce Gladfelter’s playful illustrations are often important for understanding the text. Contrast these two illustrations for this sentence: “The pitcher held the batter.” In the first illustration, a blue pitcher holding pancake batter is center stage. In the second one, well, you guessed it, the baseball pitcher is holding the baseball batter. Then again, maybe you need to see it to get it, but it is funny. Sometimes Gladfelter’s illustrations are more than important. They’re essential: “The hair came forth,” and “The hare came fourth.” Really. Can you picture the first sentence? Now try to imagine even more obscure “tapired” pants.

The book ends with a helpful glossary that explains the nuances between the homophones and homonyms.  It’s helpful to know just what farro is and what a pharaoh is, among many other confusing words, no matter what your reading level is.

As fun as the book can be, though, it begs two questions: One, can the target audience appreciate the sophisticated language required to enjoy the text? And more importantly two, who in the world is the target audience? Given the lack of text, this would suggest a lower level reader—a pre-reader or early reader perhaps. But the word plays are often complex and require a much higher reading level—maybe pre-teen, certainly older. Yet the illustrations are targeted to those early readers. Even though graphic novels give permission to older kids to read books full of illustrations, this stretches the definition of a graphic novel.

Language teachers may find the book useful, but it’s not one that most kids would pull off the shelf. No Reading Allowed ends up being one of those books that’s humorous in the premise, clever in the execution, but has nowhere to go.