No Country for Eight-Spot Butterflies: A Lyric Essay 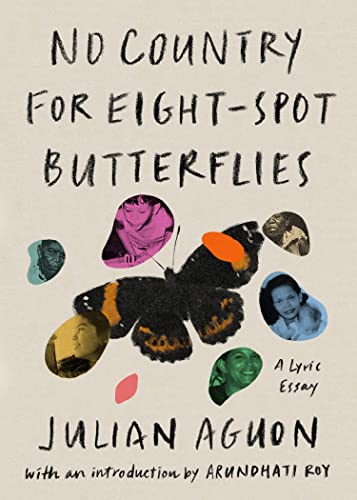 “Aguon is a skilled and heartfelt writer, and his book will most likely be inspiring to readers who share his political analysis and seek out the personal stories hidden by geo-political conflicts.”

Guam writer and attorney Julian Aguon opens No Country for Eight-Spot Butterflies with the morally necessary questions: “How obscene is it that communities with the smallest carbon footprint—like low-lying islands and atolls in the middle of the Pacific Ocean—are paying the steepest price for a crisis we had almost no hand in creating? How do warm-blooded longings for equity and justice figure into global discourse dominated by the cold language of mitigation and adaptation?”

Unfortunately, this slim collection of legal pondering, poetry, and flash memoir doesn’t pursue these questions. Instead, No Country for Eight-Spot Butterflies is written as “an homage of sorts to the work of the activist-writer,” but not for the reader. The result is an impassioned polemic when complexity is called for.

Aguon’s topics are as eclectic as his genres from the law as an instrument of justice versus stability, the daily terrors of living on an island enmeshed in geo-military conflicts to control the Pacific, the shackles of fatalism, the hopes of imagination, family stories of mourning a father, onions and garlic and grandmothers, and much more—all deserving greater depth.

A bookstore encounter with Sherman Alexie, for example, leaves the teenaged Aguon certain he’s been seen, writer to writer. As if reluctant to be found in cancel culture’s Chestnut Tree café with his fallen idol, Aguon repeats (in one of his far too many footnotes) the allegations made against Alexie with nary a demurral from that old-fashioned legal principle of the presumption of innocence.

This is a strange silence for a self-described human rights attorney, but to be fair, Aguon is “still sitting with my unresolved questions about how to continue to honor the impact his work has made without betraying his victims or survivors more generally.” Aguon’s experiences with Mother Theresa’s Home for the Dying and Destitute also receive a cursory, conflicted examination.

Unfortunately, Aguon shows no such concerns regarding Alice Walker, whom he praises as “among the most gifted of us.” Walker’s anti-Semitism is so renowned and long-established that the Anti-Defamation League (ADL) has dedicated several articles to her writing. Perhaps Aguon is unaware of this, and perhaps that’s why he repeats Walker’s attribution to Ariel Sharon of a quote that consistently eludes verification.

No Country for Eight-Spot Butterflies similarly gives too little attention to too many crucial issues, not the least of which is the lingering horrors forced on Marshall Island residents from the United States’ 67 nuclear weapons tests conducted between 1946–1958. Also given short shrift is Guam’s history with the United States and other major powers in the Pacific.

The U.S. Department of the Defense is seeking to establish a firing range along the island’s northern coast, which would destroy some 1,000 acres of native forest, as well as 40 acres of coral reefs for aircraft carriers, historically and culturally significant sites, and possibly the local aquifer as well. Aguon’s outrage at this is understandable. Unfortunately, he doesn’t pursue (except mentioned as another footnote) whether the people of Guam support their status as an unincorporated U.S. territory, or what other countries might fill the void should the U.S. leave the region.

Aguon is a skilled and heartfelt writer, and his book will most likely be inspiring to readers who share his political analysis and seek out the personal stories hidden by geo-political conflicts. More critical readers, in turn, will hopefully be inspired to learn about more about Guam and Micronesia’s history, nature, and political struggles.