No Baggage: A Minimalist Tale of Love and Wandering 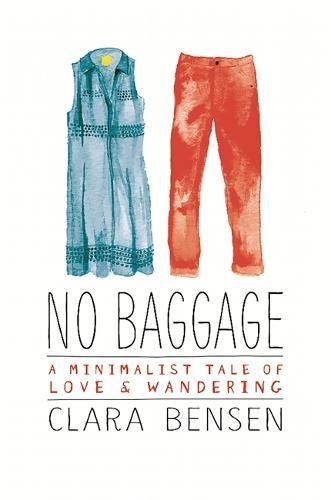 Girl meets boy through an online dating account, and they take off to see the world after only a few weeks of dating. They carry nothing with them except what’s on their backs and the necessities for travel. Between them, there is no baggage. Except there is. This is the memoir of their time together.

Clara Bensen has been in recovery from an emotional breakdown and Jeff, free-spirited, and the one to initiate their European adventure, has a hard time settling down. Together, this pair appear ripe for volatile arguments, and what seems like “passion” is probably a mismatch and two people with a lot of growth and personal work to do.

Jeff, a jokester and kind-hearted yet unpredictable, proposes to Clara on their trip, and then the next moment he is warning her away from him. Jeff’s wildness and generosity come across at times like neediness and selfishness: the need to impress or be the center of attention, the need to be wanted and desired by Clara and other women. Readers will roll their eyes and think Clara was right from the beginning. Jeff is another one of those men who is charming, not dangerous, but just low enough in self-esteem that he can and will bring others down in his (seemingly harmless) attempts to be “himself.”

While Clara is trying to not revert to her old ways of introversion and goes above and beyond by accepting this wild vacation and experiment with Jeff, she forgets to really take her needs and self-care into account. Charmed by this man who wears bold colors and a bold attitude like plumage, Clara abandons her comfort zone.

There are therapists who would counsel against such a drastic change in her life so soon after trying to heal from an emotional breakdown. And it doesn’t take long that Jeff’s charming and kind ways end up hurting Clara, who has yet learned how to speak for herself or set boundaries.

The relationship comes to a head in Sarajevo when Clara, hormonal with PMS, feels rejected and betrayed by Jeff who has spent their touring bus ride flirting with other women. Finally confronting him and setting her boundaries, better late than never, Clara tells him her feelings and needs are just as valid as his, even if they are different.

Jeff takes the emotional outburst with aplomb. Clara’s reaction to his acceptance and acknowledgement that he is trying, that he has sworn off other women to be with her, is disheartening. She compares Jeff’s avowal—to stay away from other women, and that he had stopped dating other women to see where things went with Clara—to Kerouac staying off booze.

Clara, still in her twenties, acts very much like a twenty-something in her wide-eyed innocence and foolishness with men, particularly Jeff. Readers who have moved past this stage in their life will be annoyed with the pair. Jeff is older and needs to get his act together. Clara is young and understandably naïve, but she is stereotypical. Readers who have been through her stages in life will empathize and feel frustrated with her; but readers will be equally annoyed with Jeff, if they aren’t fooled like Clara.