The Ninth: Beethoven and the World in 1824 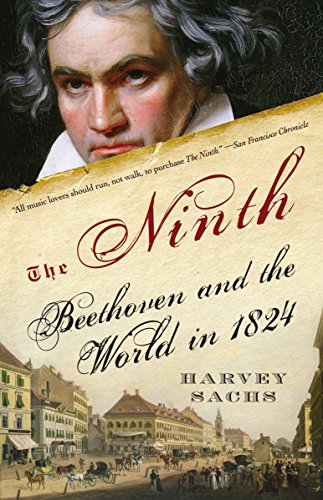 Few works of art (or artists) have those special sparks that give them staying power. Some flare brightly for a moment, but then are lost to the relentless march of time. Others struggle for lifetimes, never finding that small amount of recognition necessary to rescue them from total obscurity. And yet, here we are, almost 200 years after its original inception, and one piece of music is still a force to be reckoned with: Beethoven’s “Ninth Symphony.”

One of, if not the, most popular and recognizable works in the traditional Western canon, Beethoven’s final symphony has been quoted repeatedly, adapted relentlessly, and has inspired almost every major composer who came during or after its release in 1824. In his latest book, The Ninth: Beethoven and the World in 1824, music historian, author, and former conductor, Harvey Sachs explores the circumstances surrounding the creation of a monster.

It is no surprise that a work so focused on the concept of joy would come out of such a repressive era. In the wake of the violent French Revolution, many artists, not just Beethoven, were searching for some way to communicate, as Sachs says, “their discontent with the world.” The author expertly sets the stage for the premiere event, but with such a solid Beethoven history behind our modern ears, it is hard for us to imagine that at one time audiences would have found this new music strange—even to the point of incomprehension.

Like Sachs, this reviewer has also been a lifelong fan of Beethoven. But reading this book, especially the later section where the author discusses all the compositional details of the massive piece, required a listening to the music again. The breakdown is simple enough to understand for the musically challenged, although even masters of the craft might gain new insights by revisiting the old favorite, movement by movement and theme by theme.

At times, the author gets a little bogged down with inconsequential details of the various royal families across Europe or in discussing other contemporary artists, such as Lord Byron or Pushkin—artists not directly related to the musical genius. And without the piece playing in the background while reading, the author’s notes might become somewhat confusing to a lay reader.

Beethoven had no way of knowing his work would have such a profound impact on, not only his world, but the world to come. Sachs’ book lays out why he thinks the music became so iconic, while at the same time striving to achieve Beethoven’s goal of brotherhood and joy.

Russian revolutionary Mikhail Bakunin said to Richard Wagner, after hearing the Ninth for the first time, “If all the music that has ever been written were lost in the expected world-wide conflagration, we must pledge ourselves to rescue this symphony, even at the peril of our lives.”

Very high praise for a very important piece of music.