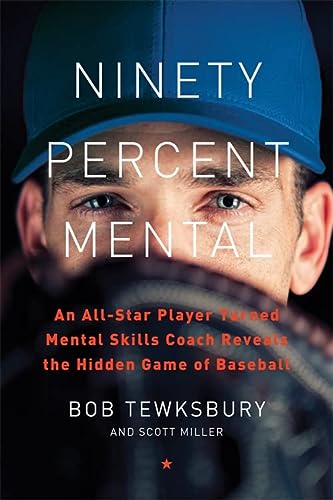 “this book should become a fixture in the library of any baseball player or coach.”

Bob “Tewks” Tewksbury logged 13 seasons playing professional baseball, threw almost 3,000 innings, retired while still a serviceable hurler, dabbled briefly in broadcasting and televising sports, earned a degree in sports psychology, and then began a second career as a mental skills coach. His just-published Ninety Percent Mental, co-authored with Scott Miller, is an ambitious combination of sports autobiography and self-help book for pitchers and all athletes.

What Tewks says made him the success he had (he made the majors, won more than 100 games, and could have pitched for several more seasons had he chosen to do so) was less his natural talent than the approach he developed to pitching. In an era where power pitching (throwing in the mid-90s to 100 mph) dominates, Tewks shows by example and coaching how someone whose velocity never reaches 90 mph can succeed at the highest levels of the sport.

Some of his secrets: Positive self talk; consistent mechanics; total focus on the task at hand; deep breathing; slowing the game down; and visualizing positive outcomes.

Tewks has created mental audio sessions beginning with his stint working for the Red Sox organization to help his players develop the skills needed to maximize their success on the field, for pitchers Andrew Miller (now an ace reliever of the Indians); Jon Lester, who tops the  Cubs’ starting rotation; Rich Hill of the Dodgers; and position player Anthony Rizzo, the Cubs’ three-time All-Star first baseman.

Tewks preaches that instead of being outcome directed and often fear motivated, success comes from dedicated attention to the processes involved, of preparation and concentration on the “how” of going about the business of pitching a baseball game, of placing oneself in the right mental place before taking the field.

Tewks is modest enough to give credit to a number of pioneers of the process-driven approach to coaching, people including Charley Maher and Harvey Dorfman, who had to break through the sink or swim tradition of professional baseball, that raw talent and harder effort were all that one needed to succeed.

Tewks takes up that baton, but what he adds to this equation is the testimony of his own experience as someone who had to have a superior set of mental strategies in order to forge a career as a major leaguer.

A wonderful example of Tewks’ approach is in his re-creation in great detail of a near perfect game he threw against the Houston Astros. In the end, players have great respect for a guy who has been there and done that, who has walked the walk, and that’s a major reason why this book should become a fixture in the library of any baseball player or coach.