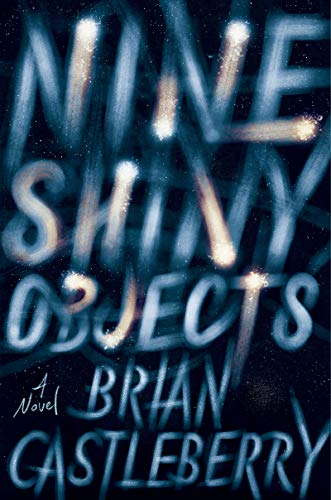 “Brian Castleberry, . . . has done a masterful job of weaving his complex pattern with a momentum that never flags. This is a novel that, like the eponymous flying saucers, sparkles invitingly.”

One day in Chicago in 1947, Oliver Danville—a 30-year-old World War II vet, would-be actor, and middling pool-hall hustler—stumbles on a newspaper article about a navy pilot who claims to have seen “nine shiny objects that reminded him of tea saucers” in the sky above the Cascade mountain range. Oliver promptly hitchhikes out to Washington State to find the visitors from outer space.

The aliens inside those saucers, he imagines, would be “dressed in clothes made of shiny tinfoil, outfitted with transistor radios,” and would teach Earthlings to stop hating each other. “He could see it, America in another ten years: the whole melting pot getting along, focused on tomorrow, a gleaming technological utopia of television communicators and robot cafeterias and trains zipping along at a thousand miles an hour.”

Starting with Oliver’s tale, the engrossing debut novel Nine Shiny Objects interweaves nine disparate narratives spanning four decades of American cultural shifts, one every five years from 1947 to 1987, traveling from Chicago to California to suburban New York to Harlem to Florida to Phoenix and more.

The flying saucers themselves quickly morph into a grander philosophy that Oliver calls the Vision. As a convert, Alice Linwood, explains, it’s a “belief in a better, more equitable world where human beings were judged entirely by the good they brought their fellow man, where all the divisions of race and class and even sex would disappear, labeled as logical fallacies, unnecessary . . . to the beings in all solar systems but our own.” Specifically, Oliver’s followers, known as Seekers, want to build a multiracial utopia called Eden Gardens in a white enclave on 1950s suburban Long Island.

Few of the narrators share Oliver’s vision. Indeed, some have their own utopian or paranoid obsessions. It’s those obsessions, which often mirror the changing society around them, that give this novel its depth.

For instance, the 1967 narrator, Skip Michaels, impulsively abandons his family and his job as a traveling salesman for the Great Books series to revive his long-abandoned dream of writing music. He is inspired, not by Oliver’s philosophy, but by a fan letter from a young rock musician who’d discovered Skip’s one, semi-successful song.

Alice and her husband, Jeff, meanwhile, become disillusioned with the Seekers after their Long Island utopia is wrecked. By 1972, Alice is a national talk-radio personality promulgating a convoluted conspiracy theory that “all the shadow government’s little and big lies, they were aimed at this single target, getting the country to this very point, where an election could be stolen and all of it could be hushed up and then what? Martial law? The mass locking-up of any citizen unhappy with the way the war in Southeast Asia was being conducted? More civil rights leaders gunned down in the streets? . . . And then of course the final move, the one she knew would be coming on the other end of the hinge, something only someone as evil as Nixon and his CIA cronies and big-oil puppet masters could plan for, a populace completely under their control, a country of walking potatoes.”

(This section is weakened by the novel’s every-five-years timeline, which requires Alice to be far more aware of the Watergate cover-up than a typical American would have been in 1972.)

Skip, Alice, the other narrators, and a rich cast of supporting characters are nimbly cross-referenced, sometimes just by the subtle dropping of a name (Vasquez, Penrod).

A floundering would-be poet from Harlem is searching for his old war buddy in one narrative; 25 years (and two explosions of violence) later in Connecticut, his buddy’s granddaughter is reading his poetry as an English class assignment.

Not surprisingly, Nine Shiny Objects suffers from the flaws typical of the multi-narrator, novel-in-stories format: The narrative voices generally sound the same, there are too many characters to keep track of, and just when a reader is starting to care about one protagonist, it’s time to move on to the next.

Still, author Brian Castleberry, a senior lecturer in literature and creative writing at the College of William and Mary, has done a masterful job of weaving his complex pattern with a momentum that never flags. This is a novel that, like the eponymous flying saucers, sparkles invitingly.