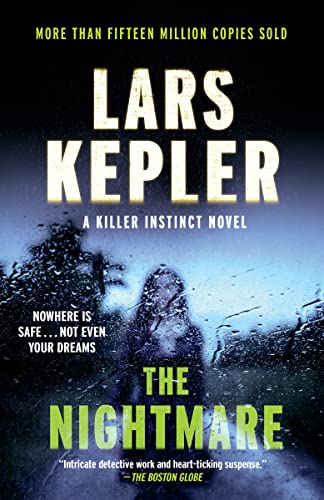 “a thoroughly enjoyable crime novel in the Scandinavian noir tradition.”

The body of a young woman is found in the cabin of a yacht drifting in the southern part of the Stockholm archipelago. Although she’s completely dry, her lungs are filled with seawater, indicating death by drowning. Meanwhile, Carl Palmcrona, a government official responsible for all final decisions about the manufacture and exportation of Swedish munitions, is found hanging in his apartment in an apparent suicide.

Detective Superintendent Joona Linna of the National Crime Unit is brought in to confer on the Palmcrona suicide. While at the Forensic Medical Department to review the postmortem report, however, he is asked by the pathologist for his opinion on another case. A beautiful young woman found sitting on a bed in the cabin of a yacht drifting in the archipelago.

Joined by Saga Bauer, an investigator with the Swedish Security Service, Joona ultimately discovers a connection between the two cases, plunging him into the dark world of international arms trafficking and the corrupt machinations of a psychopath who uses the worst nightmares of his victims as leverage in his ruthless quest for power.

The Nightmare is the second novel in the Joona Linna series by Swedish husband-and-wife authors Alexandra Coelho Ahndoril and Alexander Ahndoril, writing under the pseudonym Lars Kepler. Originally published as Paganinikontraketet in 2010, The Nightmare previously appeared in English translation in 2012.

In this second outing, the authors consolidate their respective storytelling skills in a crime novel that holds our interest and keeps the pages turning. The various faults that made The Hypnotist a shaky debut have been addressed, and the result is an excellent example of Swedish noir at its best.

Joona Linna, our intrepid hero, is now front and centre throughout, as he should be. The authors feed us a little more about him this time out, including a tendency toward extreme migraines that flare up at disadvantageous moments of physical trauma or heightened stress. Additionally, he makes a personal visit to the Nordic Museum to view a Sami bridal crown, the significance of which we are not yet meant to understand.

The Nightmare also marks the first appearance of Saga Bauer, an intriguing secondary character who will guest star in future Joona Linna stories. An accomplished boxer with an unusual and tragic family history, Saga is subjected to discriminatory treatment by her male superior officers but stubbornly refuses to be marginalized.

As well, Axel Riessen, Palmcrona’s replacement as director general, is surprisingly interesting, and the secondary themes connected to him that relate to music, particularly Italian violinist Niccolò Paganini and his supposed pact with the devil, supplement the main action quite effectively.

Plot exposition is very well managed this time out. The two cases are interwoven quite skillfully into a single storyline, and shifts in point of view to other characters involved in the mystery are handled quite satisfactorily. In contrast with The Hypnotist, there are no 100-page back story dumps this time, and the scenes featuring Axel and Penelope, the sister of the woman found in the yacht, are focused and on point.

The only false note in this regard comes when Penelope and her boyfriend, on the run from a relentless hired assassin, seek refuge in a house belonging to a television celebrity who proceeds to put them through a bizarre contest with sexual overtones. This sequence perhaps had local significance at the time of the manuscript’s original publication, but at this point in the novel’s history it comes off as jarringly random and unnecessary.

Nevertheless, The Nightmare is a rousing second effort in the Joona Linna series, and the authors must be congratulated for having constructed a thoroughly enjoyable crime novel in the Scandinavian noir tradition.