The Nightingale Before Christmas 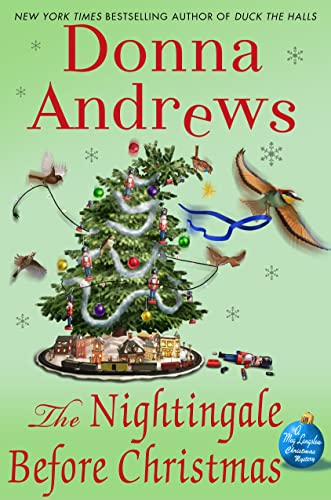 “. . . the story contains the intrigue, amusement, and intellectual challenge that Ms. Andrews reliably delivers. She also manages to slip in profundities and sentiments that warm the heart without feeling preachy.”

Now eighteen adventures into this clever series, blacksmith Meg Langslow has mostly left her smithy behind to manage her family—not just her beloved husband and twin sons, but also her endearing (and maddening) parents, grandparents, aunts-uncles-cousins, in-laws, and an enormous extended family of eccentrics associated with the clan.

In The Nightingale Before Christmas, Meg’s tribe embraces the interior designers of Caerphilly, Virginia, during creation of a holiday-themed show house. Meg gets pulled into organizing the fund-raising charity event because “They threatened to turn my house into the show house . . . I agreed to organize it if they’d hold it somewhere else. Anywhere else.”

Which happens to be an empty home in the village owned by a bank eager to get rid of it. Recently it had been vandalized, and without the zealous efforts of the decorating team it would eventually fall to ruin.

Each decorator is assigned a room for showcasing their talents—putting too many artistic egos too close together. During the consequent temper flares and histrionics, someone starts sabotaging the project.

At first everyone thinks the villain is the obnoxious, ex-con designer they all despise, until he ends up murdered. So many of the decorators have motives that Meg—and the police—hardly know where to start.

The number of people trooping in and out of the house, along with people associated with the house’s and each other’s pasts, creates a smorgasbord of suspects. Twice Meg is almost caught in the crossfire. As commonly happens in the series, the murderer is hiding in plain sight, and sharp readers will spot him/her early while the rest of us go galloping off in various wrong directions.

Although the series is hailed as “hilarious,” in actuality Ms. Andrews has the knack of making her novels optionally funny. The narrative can be read straight, in which case it’s a light and entertaining mystery, or one can find different layers of humor woven in, or tucked in unexpected corners, drawing reaction ranging from a chortle to a thigh-slapping guffaw.

This holiday volume is less goofy than others, perhaps because of its Christmas theme. Likewise, the signature bird of title is linked to a touching legend about a nightingale rather than involving a literal bird, as with emus, macaws, and hens of previous titles.

Regardless, the story contains the intrigue, amusement, and intellectual challenge that Ms. Andrews reliably delivers. She also manages to slip in profundities and sentiments that warm the heart without feeling preachy. The combination makes a winning series, and new and established readers alike will look forward to the next installment.