The Night: A Graphic Novel 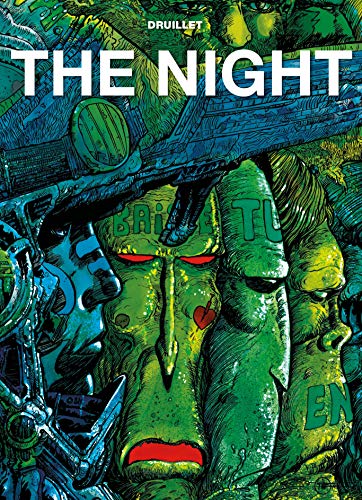 “Brief and beautiful, Druillet’s genius shines through in this madcap adventure across post-apocalyptic wastes.”

In a post-apocalyptic wasteland biker gangs battle each for supremacy. The pulpy premise came about when the French comic book artist Philippe Druillet lost his wife to cancer. The brief comic, only 72 pages, is called The Night. Conceived in 1976, it has been released by Titan Comics in 2019. Mr. Druillet is author of the Lone Sloane series and Yragaël /Urm the Mad. The Night was originally published in France by Éditions Glénat in 2014 as La Nuit.

Quotes from Charles Baudelaire bracket the comic. The opening quote ends with the ominous line, “Living’s a curse. A secret all men know.” On the opposite page is a black and white portrait of Druillet’s wife, crowned with a garland of flowers and holding a bouquet. She stands in a field, her beauty and serenity captured.

After the obligatory front matter, Druillet savages the medical establishment in a ferocious rant beneath a color picture of his wife on the beach. He doesn’t pull his punches as he rails against “the lady doctor, purveyor of death, a doctor of MEN, a doctor of MONEY, and worse yet, a doctor of CURIE.” The tirade continues, “J’accuse, you stupid butchers, MORONS with your white frocks and your big words.” The opposite page has a painted portrait of his wife, nude, hands crossed, with blue skin and red hair, standing in front of a baroque monstrosity. The evil thing looks ready to devour her.

It is a longstanding tradition, verging on the cliché, about the suffering artist. Vincent van Gogh stands out as the ur-example. In the case of The Night, the artist has turned his very real suffering into a magnificent piece of comic book art. The narrative involves murderous psychotic biker gang called the Lions. They battle the Kopfs, ruthless and robotic bug creatures, authoritarian and cultish, sporting glowing skull masks. The dialogue is rough, raw, and rudimentary. “Fight, shoot up, kill! Ride!” one biker says. In another panel one biker says, “Got no more skagg to trade. Took it all.” His companion replies, “We’ll bleed the sleepers.” Less Clockwork Orange than caveman, the coarse language contrasts wildly with the advanced technology of the world.

The Lions will destroy who- or whatever lay in their path, their ultimate goal to recapture the Blue Depot. After the Lions battle the Kopfs they seek refuge from a sandstorm and hide underground. As Frankie, one of the bikers says, “We must take back Blue Depot, or else Death take us all. No skagg, no life. And dawn come too soon. Palefaces many, and Kopfs prowl above.” So the bikers unite with other so-called tribes, climb on to their airbikes, and prepare for an all-out ultraviolent onslaught of the Blue Depot.

The Night has an exciting plot and expletive-laced dialogue, but Druillet’s art brings unites narrative and dialogue into a satisfying whole. The style could be called “psychedelic baroque,” equal parts hallucinatory and hyper-detailed. The linework is rough and jagged, while the colors are bright and lush. The color work, oranges and greens and blues, do not create a traditional brightness but yield a more soupy and foggy texture to the story. Everything radiates a kind of visual nausea, colors bleeding into each other, as if the narrative itself will eventually collapse in on itself.