The Night Always Comes: A Novel 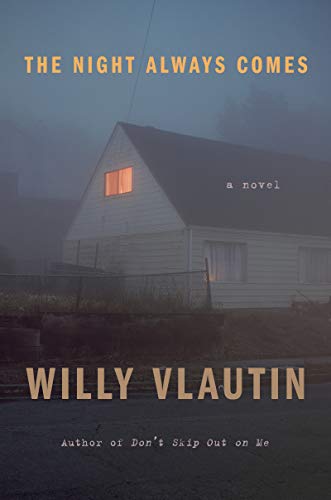 Lynette’s alarm goes off at 3:15 a.m. She is 30 years old. She wears ten-year-old sweats and wool socks to bed. Her room’s warmth depends on a portable heater; it doesn’t work very well. Lynette’s older brother Kenny is developmentally disabled. “He had monthly seizures and couldn’t talk but for the sounds that came out almost like words.”

The house where Lynette lives leaks when it’s raining. Lynette’s bedroom includes a washer and dryer, an oil furnace, and a concrete utility sink. Two broken legs on a dresser have been replaced by bricks. Lynette’s mother sleeps upstairs in the living room on the couch with the TV on, covered in a leopard-print electric blanket.

Once again, Willy Vlautin’s spare, matter-of-fact prose pulls us quickly into a story. It’s no surprise, if you’ve read Vlautin’s first five novels, that The Night Always Comes shines a light on those who are scratching out a living. In Don’t Skip Out on Me, it was half-Paiute ranch hand Horace Hopper and his dreams of becoming a boxer. In Lean on Pete, it was 15-year-old Charley Thompson and his tireless cross-country journey, with an underappreciated horse, in search of home. And in Northline, it was waitress Allison and her flight from an abusive boyfriend and search for a better life. It’s hard to imagine Vlautin caring or writing about a character born with a silver spoon in his or her mouth. Vlautin isn’t interested in polish.

In The Night Always Comes, Lynette is chasing a dream. An All-American goal. She wants to stop paying rent and buy the house—even with its issues—where she lives. To do this, she needs her mother Doreen’s help to qualify for the loan. And right when the plan is coming together, Doreen changes her mind and spends cash on a new car. “I’m fifty-seven years old and I still buy my clothes at Goodwill. It’s a little late for me to care about building a future,” says Doreen.

But Lynette won’t give up on her opportunity to move up in the world. She knows the offer to own a little piece of the fast-gentrifying section of Portland, Oregon, won’t last long. What Lynette decides to do over the next couple of days is find a way to boost her cash on hand so she can buy the house without her mother’s help. Just as she spots a way to brighten her future, her past is ready to yank her back down.

Lynette’s search dredges up her dark and troubled past as she knocks on doors and hits up old connections, calling in debts or spotting opportunities in the moment. These odyssey-by-night scenes put Lynette through harrowing and sometimes violent confrontation with the underbelly of urban life—meth tweakers; ex-cons;and a beautiful, cocaine-addicted friend named Gloria. Lynette bargains, pleads, cajoles, lies, betrays, and tricks.

In order to get a foothold in the mainstream economy, Lynette finds herself navigating dark corners of underground wheeling and dealing. We see Lynette’s first 30 years in detail, and we learn about the choices she made to accumulate her nest egg, all while coming face-to-face with the state of her own mental health. We watch Lynette develop the ability to be honest about who she is and what choices she’s made to make it this far.

There is always desperation for Willy Vlautin’s characters, but The Night Always Comes adds a noir flavor that gives the story an extra layer of tension. The writing is spare, talcum dry. Two hundred and eight pages fly by. There’s enough plot in this novel for double the length, but Vlautin also makes time for heartfelt conversations between Lynette and many others including Doreen, Gloria, and a predatory ex.

Vlautin’s prose has drawn raves from such varied writers as Donna Tartt, Megan Abbott, Richard Russo, and Craig Johnson—for good reason. The Night Always Comes is another fine entry in Willy Vlautin’s well-chiseled portraits of the working class—both men and women, sometimes youthful, sometimes hardened—and their real-life choices in search of hope. By Vlautin standards, the ending of The Night Always Comes is practically upbeat. But be forewarned, it will break your heart.