The Night Agent: A Novel 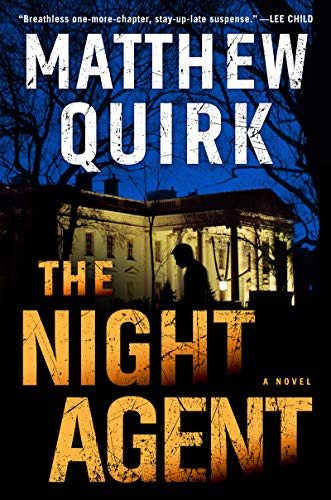 “The Night Agent is a disappointment. It’s predicable and uneven, and it leaves an odd taste in your mouth, like drinking coffee right after brushing your teeth.”

When FBI agent Peter Sutherland was a boy, his father, a section chief in counterintelligence, apparently committed suicide after having sold secrets to the Russians. Now Peter is assigned to monitor a mysterious emergency telephone line in the White House Situation Room while trying to live down his father’s legacy of betrayal.

One night at 1:05 A.M. the phone rings, and Peter speaks to a terrified young woman named Rose who provides all the required code words before transmitting her message—that two people have just been murdered and the killer may still be in the house with her. While his job is merely to pass on the message to his superior, Peter finds himself plunged into an internal conspiracy years in the making, with Rose’s life and his own squarely in the crosshairs of a relentless Russian hit man.

Unfortunately, The Night Agent fails to live up to the hype. Suspension of disbelief is difficult to generate early on when we realize that Peter has landed a plum job in the famed Situation Room despite lacking the experience to qualify for such a sensitive position. Compounded, of course, by the constant reminders from everyone around him that his father was a traitor and that the apple never seems to fall far from the tree. Should a relative tyro with this kind of notorious background even get inside the building?

The novel barrels downhill from there. Peter’s response to the call from Rose is entirely predictable—he proceeds to disobey orders and plunge into the situation like a heedless young dog jumping off the end of a dock into a cold river. Indeed, predictability characterizes the novel as a whole. Quirk telegraphs each “surprise” twist long before it happens, and after a while some readers may grow impatient and start flipping ahead in search of something truly surprising.

One gets the sense that this book was rushed to print in order to take advantage of its timeliness. Quirk’s administration occupies the same time period as the current one, and President Travers is a political outsider who defeated his female opponent after Russian hacking embroiled her in financial scandals. Sound vaguely familiar?

The parallels to the actual current president are not complete, however, as Quirk grafts other characteristics onto his fictional president drawn from sources such as Barack Obama and Josiah Bartlet of The West Wing (basketball, for example, and expediency combined with, well, basic intelligence). The result is a sort of rag doll president who may be untrustworthy and cost Peter his life, or might just end up saving it. Who knows where this guy’s coming from?

Although it’s very nice to see the heavyweights in the industry lining up behind Matthew Quirk as his latest political thriller hits the stands, The Night Agent is a disappointment. It’s predicable and uneven, and it leaves an odd taste in your mouth, like drinking coffee right after brushing your teeth. When this particular phone rings, you might as well just let it go to voicemail and spend your time reading something else that’s better written.