Nicnevin and the Bloody Queen 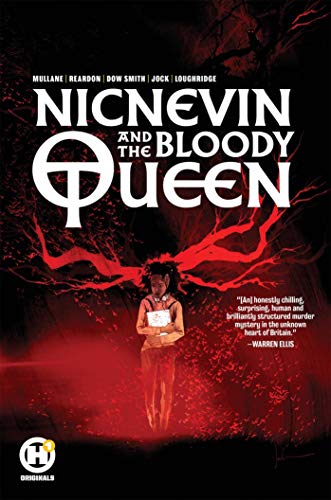 “Nicnevin and the Bloody Queen is a well-drawn graphic novel, but its story is rushed and chock full of clichés.”

The old gods of Celtic Britain may be forgotten, but they are not dead. That’s the central conceit in the graphic novel Nicnevin and the Bloody Queen by writer Helen Mullane and artists Dom Reardon and Matthew Dow Smith, which resurrects the pagan deities in the midst of a murder story.

Nicnevin Oswald is a troubled 15-year-old Londoner. Because of a problem with drugs she, her brother Gowan, and her mother decide to spend the summer in Yeavering, Northumberland. Their new home is a dark pile of stone, and local legend says that it once belonged to a witch. It turns out that this is no legend at all, for Nicnevin and the women of her family belong to a long line of folk magicians.

While Nicnevin and her mother are busy squabbling, Gowan stumbles across the butchered body of an elderly woman. She has been murdered. It’s a ritual murder. The police get involved. As for Nicnevin, she gets involved with a handsome researcher named Reggie—a former banker with a passion for the lost Votadini people of pre-Christian Britain. Nicnevin thinks she’s in love, but really she’s just being targeted.

Nicnevin and the Bloody Queen presents pagan Britain as a rich tapestry of magic, goblins, and fairy queens. However, as the conclusion also shows, the old gods are always thirsty for blood, especially male blood. A lot is made of the ancient matriarchy in this graphic book, and it is obvious that Nicnevin is the heir to this long line of powerful and otherworldly women.

For those interested in murder mysteries, you can skip this graphic novel. There is no mystery here; it’s obvious who the culprit is from the get-go. The motive is plain to see too. In many ways this story is predictable to the core: a troubled young teen from the big city relocates against her will to the country, and then strange stuff starts to happen. The “strange stuff” in turn is revelatory in that the events reveal the teen’s hidden talents and secret identity.

All of the oddness in Nicnevin and the Bloody Queen goes without much explanation. Nicnevin just starts seeing wandering, possessed animals one night and never stops seeing them. The idea is that Nicnevin’s special blood allows her to see such things. That’s all well and good, but there is not enough character development here to really make readers care either about Nicnevin’s gifts or about the old gods of Albion.

Nicnevin and the Bloody Queen is a well-drawn graphic novel, but its story is rushed and chock full of clichés.