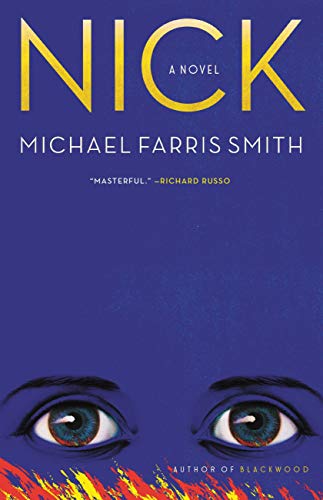 “The story of Nick is the story of one lost soul on automatic pilot written in four compelling parts that dovetail to weave a psychic template of a WWI survivor. Its impact is profound, its resonance subterranean.”

It will take hours to wipe the awestruck look off your face after reading the last line of the anxiously anticipated Nick by Michael Farris Smith, a writer with a wildly enthusiastic fan base that fancies itself insiders to Farris Smith’s gritty esotericism. You’re cool if you follow this Oxford, Mississippi author. You are in-crowd if you’re hip to this writer who seemed to inherit the tool kit of the great Southern writers before him. Referred to as MFS by those who take his work personally because his stories do the talking for a certain strata of a particular region, in some ways Farris Smith’s clear, direct, and economic voice is an acquired taste even as his career prospers. But the publication of Nick will change all that, and wider readership will understand the attraction of this fearless writer who transcends literary limits and boundaries and plays by his own rules.

What the world knows of F. Scott Fitzgerald’s narrator in The Great Gatsby is cryptic: Nick Carraway is a young man from a middle-class family in Minnesota who has come to New York after graduating Yale and fighting in the first World War. The prequel to The Great Gatsby could have been seen to from any angle. MFS chose to get into the trenches with Nick literally, figuratively, and metaphorically then stay there. He gives us Nick Carraway’s backstory with an unvarnished depth of experience because the reader deserves it, and it’s what Farris Smith does best.

As a stranger in a strange land, shell-shocked from a war he volunteered for, Nick suffers from  traumatic, battle worn isolation, but when he crosses paths with a woman on the streets of Paris during his seven-day leave, he finds an unlikely kindred spirit in Ella, a street urchin who takes up illegal residency in an abandoned building’s attic. “She was blunt and beautiful and scratching and clawing and free and bound and she seeped inside him.” There are similarities in Nick and Ella: “He stared across the city and sensed not only her loneliness but the eternal loneliness that resides in us all and for the first time since he had felt the anxiousness of youth he realized that he wasn’t alone. There are others like me, he thought. And she is one.”

In the trenches—bombs and sirens and death all around him—Nick’s saving grace is his memory of Ella, and when he returns to Paris on another leave, he finds her in dire circumstances that he tries to fix, but Ella sends him away, causing Nick to reflect on his Midwestern upbringing, “The world repeats itself.” Sensing an uncanny connection in circumstances, he realizes, “I have been here before and I will be here again. I wonder what war I will fight in next and will it be worse and who will be the enemy. What hand will I try to hold somewhere in my future that will remind me of this hand I am trying to hold now.” As a soldier in the trenches, a listener in the tunnels, left for dead beneath corpses in a pit, and rescued by elderly, rural locals, thoughts of Ella haunt Nick until the end of the war, even as her memory sustains him.

After a fruitless, last-ditch effort to locate Ella, Nick leaves Paris to return to America but can’t face returning to his Midwestern parents. Fueled by his post-traumatic stress and tormented mind, Nick drifts to New Orleans with nothing to lose. “He sauntered out of the train station in a stupor and had forgotten what city he was in and only knew that he was in some unfamiliar place, carrying the punishment of having survived.” Disillusioned and without a plan, Nick walks the streets of New Orleans and “It was as if he had bled out of one perplexing and dreamlike sequence right into another.” In short order, he becomes entrenched in an area called Frenchtown, whose underbelly provides the collision of nighttime, bad chance, and a local brothel.

Colette is estranged from Judah. The New Orleans, childhood sweethearts were married until Judah went off to the war. After word of Judah’s presumed death, Colette survives as proprietress of a brothel. Because Nick frequents the establishment, he is there on the night it suspiciously burns down, and as he flees the infernal scene, fate delivers him into the revengeful plan of Judah, and soon Nick becomes the apex of a triangle.

In the way of like attracting like in a band of brothers, Nick develops a strange loyalty to war veteran Judah, who owns a Frenchtown saloon and is permanently wounded to the point he can’t abide his existence without opium. Judah cannot fend for himself, and as Nick condones Judah’s dependency on him, he is drawn into Judah and Colette’s adversarial story.

Because the bedfellow of love is hate, and local assumption is Judah is behind the burning of Colette’s brothel, Nick asks Judah what went wrong with him and Colette. Farris Smith is at his trademark best as Judah addresses Colette’s betrayal, “Colette’s promises were promises to the world and those are the easiest to break. And as far as promises we all make to God, if every person who had ever made a promise to Him went through with their end of the deal then there’d scarcely be a lost soul in this world.” And yet, after all is told, the arc of Judah and Colette suggests the hope for transformation and redemption.

The story of Nick is the story of one lost soul on automatic pilot written in four compelling parts that dovetail to weave a psychic template of a WWI survivor. Its impact is profound, its resonance subterranean. For all the beauty in the world, Nick reminds us there’s a flip side, that people are haunted and broken and desperate, and Michael Farris Smith knows there’s a story in it. Once you dive into Nick, you’ll be held captive. Once you attune yourself to the rhythm of Farris Smith’s voice, you’ll follow him anywhere.