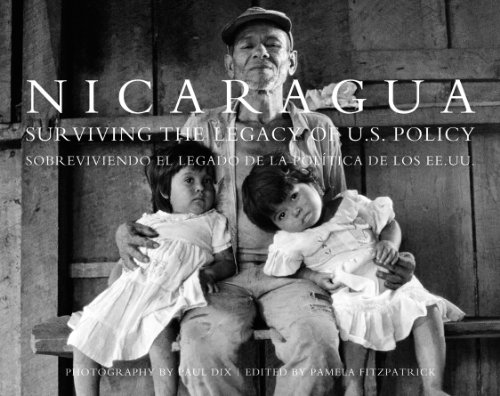 “an extraordinary book of stunning black and white images of the men and boys, women and girls, who lost limbs and loved ones and managed to pick up the pieces of their lives and move on after 10 years of devastating conflict. . . . unique and riveting . . .”

Seldom do world-class war photographers get a chance to go back years later to follow up on what happened to the people in their dramatic images.

Paul Dix, a staff photographer for the organization Witness for Peace from 1985 to 1990, documented the suffering caused by the U.S. foreign policy decision to arm and train counterrevolutionaries fighting against the Sandinista government, which overthrew Nicaraguan dictator Anastasio Somoza in 1979. In 2002 he and Pam Fitzpatrick, a Witness for Peace colleague, returned to Nicaragua in search of 100 people who were subjects of Mr. Dix’s photographs, people whose lives had been irrevocably changed by war.

The result of their 17-month odyssey is an extraordinary book of stunning black and white images of the men and boys, women and girls, who lost limbs and loved ones and managed to pick up the pieces of their lives and move on after 10 years of devastating conflict.

The book documents the follow-up with 30 people whose stories had particularly moved Mr. Dix. The “then and now” shots are displayed alongside brief quotes from the survivors, very personal reflections on how they managed to live through the violence and somehow find the courage and resilience to heal and hope for a better future.

Not only do the images burn into the reader’s consciousness, but the simple words of the victims also make powerful statements about the very real horrors of war. The testimonies and the brief explanatory text are in English and Spanish.

One of the people Mr. Dix and Ms. Fitzpatrick searched for and found was Felix Pedro Espinales Mendoza, whom Mr. Dix had photographed in 1987. The memories of a nighttime contra attack on his village still haunt him. “And there, my brother and I walk on top of the dead. I touch the hands, I touch the blown-apart bodies, everything. . . . And only I, my brother, and a little girl, very young, survived the attack.” (Bocana de Paiwas, March 1, 2005).

Dispersed throughout the black and white imagery are children’s drawings, sporadic bursts of color of houses on fire, bodies lying on the ground, and tears running down simple oval faces.

This unique and riveting book belongs in every library across the Americas, on all the desks of foreign policy decisionmakers in Washington, and in the hands of human rights activists everywhere.

An eloquent introduction by internationally renowned Nicaraguan poet Giaconda Belli underscores the book’s importance: “Let us open this book, let our eyes wander over the luminous black and white of these photographs, over the tenderness yet also the iron will to live expressed by these people whom the war damaged but could not destroy. And let us reflect on the need to forever put an end to a violence which belittles us all.”