Newspaperman: Inside the News Business at The Wall Street Journal 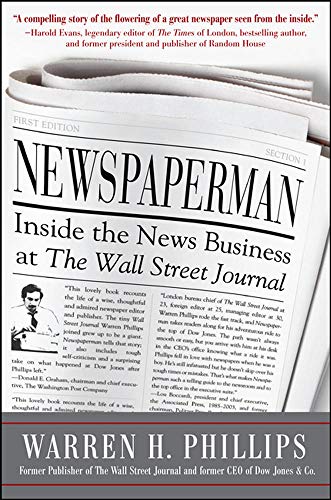 “Newspaperman is part memoir, part history. . . . Certain chapters read like a Who’s Who of business, publishing, and/or politics, a fact to which [Warren Phillips] readily admits. He hopes such litanies might help to keep the reader engaged; however, the adventures and misadventures involved in running such a huge empire are more than enough to keep the reader fascinated by this journey of nearly half a century.”

Newspaperman is part memoir, part history. Starting with post World War II Germany and England through the end of the 20th century, the author takes us on a journey through his life during a tumultuous period in America, Europe, Asia, and even outer space.

A graduate of Queens College in 1947, he did not make the cut for Columbia’s Graduate School of Journalism—a slight that Columbia no doubt regretted in later years. The Journal was a default employment choice for Mr. Phillips, but it was there that he honed his passion for newspaper writing. He never tired of the adrenaline rush as the presses geared up for the run, or the opportunities that reporting presented.

“. . . journalism offers a front-row seat on history. . . . Reporting and researching each new story provided an education in new subject after new subject. . . . There are few other vocations where one is paid to keep on learning, to keep on broadening one’s knowledge.”

Learning from his long-time mentor, Barney Kilgore, Mr. Phillips never forgets a key bit of his sage advice: “The easiest thing for a reader to do is stop reading.” This becomes a theme throughout, i.e. always improving and evaluating, never resting on past achievements and “re-earning the trust of each reader daily.”

In the late 1950s, Mr. Phillips, as managing editor, realized the importance of covering news stories not solely about business but also what affected business. The Civil Rights revolution, then the Space Race broadened the agenda.

In the 1960s, the Kennedy assassination, the Vietnam War, and Watergate contributed to the rise of investigative journalism. It became necessary to look beyond what merely happened, and to analyze its significance and implications for the future. This period also ushered in the evolution of global expansion.

President Richard Nixon visited China in the 1970s, which accelerated exploration into the little understood ways of the world behind the bamboo curtain. During this same decade, satellite transmission influenced production. With his finger on the pulse of strategic opportunities, Mr. Phillips worked to diversify the company in the eighties, being equally honest about successes and failures.

During Mr. Phillips’s tenure, circulation increased from 100,000 to over 2,000,000. He elaborates on this and other factors that contributed to the strength of the Wall Street Journal—even as the digital age began to weaken the influence of printed media. These include integrity, innovation, and diversity.

The paper returned gifts, much to the chagrin of some donors. Perishables, like sides of beef in the Chicago Stock Yards days, went to charities. Editorial policy did not permit the use of harmful language (i.e. ethnic slurs, profanity). Even quotes containing them were not permitted. Covert hiring—the practice of embedding reporters in workplaces to get a story—was eliminated, and in the sixties the Journal refused to act as a cover for CIA activity, fearing that no reporter would ever be safe if they did so.

The digital age presented opportunities for diversification, such as branching into computerized data retrieval, and the acquisition of related businesses. Partnering and networking, is essential to the success of any large corporation. Knowing when NOT to do so proved equally important. Mr. Phillips comes across as the quintessential team player, both within his company and among other editors, publishers, and CEOs.

An entire chapter lists the achievements of each of the “dauntless Phillips Women.” He credits his wife, Barbara, with much of his own success. His affection for her and his three daughters is clear. The importance of family life shines through, albeit in a very factual and unemotional way.

Readers might wonder about Mr. Phillips’s opinion of the Journal after his retirement in 1991 and its purchase by media mogul Rupert Murdoch. He feels that the paper is much improved and changing with the times. Today, the reader enjoys food, wine, and fashion news along with financial information and features. (The 2011 hacking scandals within the Murdoch empire had not occurred at the time of his writing.)

Using liberal doses of Yiddish humor, Mr. Phillips candidly admits his foibles. He pokes fun at himself—a skinny kid from Queens who had a lot to learn as he navigated his way through the world’s rarefied social and political strata. Certain chapters read like a Who’s Who of business, publishing, and/or politics, a fact to which he readily admits. He hopes such litanies might help to keep the reader engaged; however, the adventures and misadventures involved in running such a huge empire are more than enough to keep the reader fascinated by this journey of nearly half a century.