News of the World: A Novel 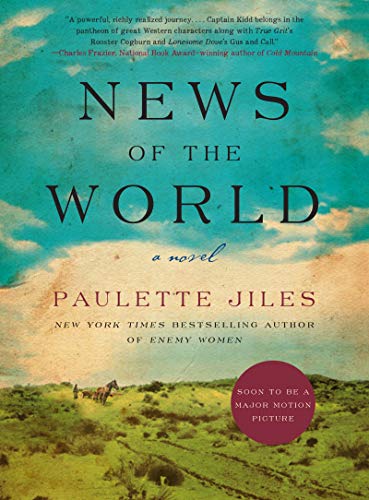 News of the World by Paulette Jiles is everything a western novel ought to be: strong plot, evocative setting, difficult moral choices, and unforgettable characters.

Captain Jefferson Kyle Kidd, 72-year-old veteran of three wars, travels the backroads of Texas with his portfolio of newspapers, bringing the news of the world to small towns and hamlets. For a dime for admission, Captain Kidd reads articles from his collection of newspapers to a populace starved for news.

Captain Kidd has one unbreakable rule: He will not read articles from any of the Texas newspapers he deems propaganda from Texas’s Reconstruction government. Any such articles are sure to start a fight, usually bloody, between former Confederates and Yankee Republicans.

Besides, as a Confederate veteran himself, he doesn’t want to draw any unwanted attention from the state’s corrupt and tyrannical government. Texas in 1870 is very much a divided house. “He had become impatient of trouble and other people’s emotions.”

In Wichita Falls he runs across an old friend,  Britt Johnson, a black freighter who also rescues white captives from the Comanche, the Kiowa, “and once from the Cheyenne up north  in Kansas.”

Britt has a white girl, Johanna Leonberger, kidnapped from her home four years earlier by the Kiowa. The Indian agent at Fort Sill gave Britt a fifty-dollar gold piece to transport the girl to her aunt and uncle in Castroville just outside of San Antonio, some 400 miles south.

Britt asks Captain Kidd to take her instead and he can have the fifty dollar gold piece. “. . .  the thing is, if I’m caught carrying that girl it would be bad trouble . . . She’s  a white girl. You take her.”

The women of Wichita Falls provide a dress, underwear, stockings, and shoes, and the ladies of a local brothel scrub her clean, including her lice-ridden hair. “They shoved her out the door and good riddance.” Even at ten years old Johanna is a handful for strong and take-no-nonsense whores.

Captain Kidd buys a spring wagon with “Curative Waters East Mineral Springs Texas” painted on the side. It has two rows of seats and a canopy. It’s the best he can do. So the Captain and Johanna, who has forgotten her English, her white family, and believes she is Kiowa, leave on the long journey south “into the brasada, the short-brush country of San Antonio, with its slow, uncoiling alluvial rivers and its great live oaks in the valleys, its slow uncoiling people.”

Johanna walks beside the wagon singing a Kiowa song. “In this land there were no Kiowa or mother or father. She was utterly alone, trapped in peculiar clothing . . .” Captain Kidd shows her his revolver and shotgun and warns that there might be danger on their journey. “It seemed to him that she understood but was not willing to concede they might be on the same side against anyone or anything.”

Trouble comes soon and often, first with a troop of U.S. Calvary, whose commander demands to know his business, then asks if he has a revolver. The Reconstruction government has forbidden civilians from owning handguns, and the Army is the enforcer. The captain knows this and has already hidden his gun. He thinks it’s daft to disarm people when there is an outlaw or hostile Indian behind every bush.

Passing muster with army, the captain and Johanna travel on the Dallas where he does a reading. San Antonio is a long way and needs his dimes. After the reading a blonde man accompanied by two Caddo Indians, people the captain knew did not have a “commendable reputation,” asks how much he wants for the girl.

The captain arranges to meet the blond man in the morning, then runs back, rouses Johanna, and they sneak out of Dallas. The captain hopes to outwit the man by taking the Waxahachie Road, then cutting over to the Meridian Road later.

The ploy doesn’t work, and the captain and Johanna make a stand on top of a hill. They are outnumbered and certainly outgunned. A .38 revolver and shells filled with bird shot for his shotgun will not prevail against Henry repeating rifles. He fails to account for Johanna’s ingenuity as she finds a unique use for the dimes he collected at his last reading.

After the defeating the blond man and the Caddos, the little girl who believes she is a Kiowa and the old man who doubts that she will ever revert to the white girl she had been before, continue on to Castroville near San Antonio.

There have been incidents that disturb him, as when Johanna steals two chickens for their supper. To Johanna it is not stealing. It is only stealing if you take a man’s horse. He doesn’t know what it is that changed Johanna so profoundly, but he despairs of her ever being other Kiowa in a white girl’s clothing.

What worries him most is whether Johanna’s aunt and uncle will understand that she’s not the same girl they knew. She does not remember her own parents, nor the raid that caused their deaths. She only remembers her Kiowa parents. He hopes her relatives will be kind and patient with her.

When he meets Wilhelm and Anna Leonberger, his misgivings grow. These are hard people who will work Johanna like a mule. The captain has given his word that he will return Johanna to her people. What should he do then? Kidnap Johanna like the Kiowa did?

Heartwarming is an adjective in every book reviewer’s lexicon, but is often used casually to describe any book featuring children and domestic situations. In the case of News of the World by Paulette Jiles, heartwarming is exactly the right word. If one does not shed a tear over this lovely story, or at least think about it, then one has no heart.