New York's Finest: The Greatest Stories of the NYPD and the Hero Cops Who Save the City 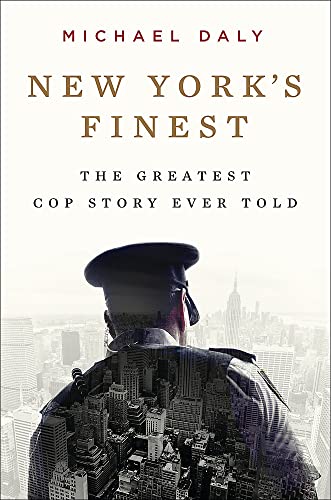 “Daly’s research and vibrant writing provide the reader with a clear understanding, especially through the two men he selected to honor, of what police work is supposed to be.”

In Michael Daly’s recent book, New York’s Finest, he introduces the reader to the men and women whose dedication to police work goes above and beyond the expected.

In particular, he focuses his attention on two officers, Steven McDonald and Jack Maple, although to get to the heart of each man Daly tells the stories of the many people who surrounded these men and the effect they had not only on McDonald and Maple, but the lasting effects they had on the city.

McDonald was the embodiment of what police work is painted to be. A third-generation police officer who did the work because it was inbred into his psyche. He ran into situations where most people would hide behind the closest structure they could find. This desire to do what is right, of course, cost him dearly when he was cut down in pursuit of criminals.

His story is told early in the book in stunning detail. After being shot several times at point blank range, and being rushed to the hospital, the doctors did not give him much of a chance for survival, and yet MacDonald was not about to give up. And he did survive, albeit paralyzed. He retained his status as officer and remained on the force although not as an active, on-the-streets officer. There was not an event that he missed—he spoke at schools, to organizations, appeared at parades; he presented himself at funerals of those who were cut down and did not have the opportunity that he experienced. He embodied the force and was its best representative.

Probably one of the most stunning examples of his ideal was his desire to forgive Shavon Jones, the young black man responsible for shooting him. While that situation did not turn out exactly as he had hoped, the fact remained that throughout the rest of his life, MacDonald forgave Jones.

The other officer who Daly focuses on is Jack Maple—a character in every sense of the word. Daly explains Maple’s dedication in a different way, and yet his love of the NYPD is every bit as important.

Maple is described as “riding through New York’s underground in pink high-top sneakers with a squad of decoy cops, developing strategies that would eventually transform the city.”

Most of his coworkers as well as his bosses considered many of his ideas to be off the wall and not workable, and yet Maple never gave up. He climbed the ladder to the hierarchy that would place him in positions where he could implement his ideas. His main goal? Reduce crime in New York City, and over the years that is exactly what he did.

Although their goals for the force were basically the same, these two men differed in other ways. McDonald was a devoted family man, Maple not so much.

There are many, many persons named through the book who took on important roles in the lives of these two men, but one of the more compelling sections is how Daly discusses the relationship between the various New York Mayors and the department as a whole.

There seemed to be no love lost for Mayors Rudy Giuliani, Michael Bloomberg, and Bill de Blasio. Daly also gives substantial attention to commissioners, especially Bill Bratton. Daly does a good job of putting egos on display using just the facts, not opinions.

As he moves the story along, keeping the focus on these two police officers and their activities designed to make New York safe, at times Daly moves back and forth through time, but for the most part he moves forward, and it should be noted that probably the most stirring part of the story is not the activities of Steven McDonald or Jack Maple, but the roles that NYPD and FDNY played on September 11, 2001. The chapters dedicated to this event are hard to read through—Daly reports the events of that day through the eyes of those who ran to not from the towers.

New York’s Finest is a tribute to these city workers who give everything, never knowing for sure if they will go home at the end of their shift. Daly’s research and vibrant writing provide the reader with a clear understanding, especially through the two men he selected to honor, of what police work is supposed to be.