New York to Dallas (An In Death Novel) 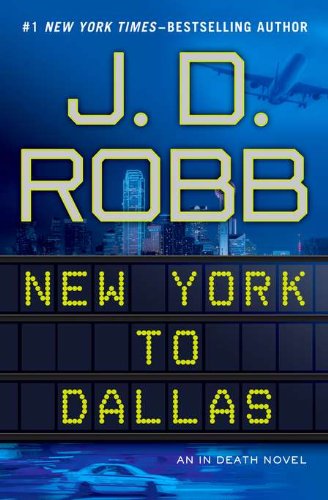 “J. D. Robb is at the peak of her powers as a writer—truly masterful.”

The year is 2060, the city is New York, and Lt. Eve Dallas of NYPSD is hunting a sadistic pedophile who has escaped the notorious Rikers Island prison. Dallas is all too familiar with this cave dweller, having been almost killed by him years earlier when she rescued a den full of young victims who had been tortured repeatedly.

Now, after years of confinement, Issac McQueen is intent on adding to his collection of young girls, kidnapping and raping them in a sick ritual that he claims “educates” the children. Each child bears a numbered tattoo, marking her for life as part of his collection—and reminding each young victim forever of their horrific ordeal.

Lt. Dallas is aided in her manhunt by her über-rich husband, who is also highly skilled in all things electronic and computer related. He provides Dallas with every creature comfort and electronic advantage available. Together they form a formidable team, able to gather and analyze intelligence like no other sleuths can.

The husband/wife team quickly find themselves in Dallas, Texas, after discovering their prey has relocated there. McQueen’s reasons for leaving New York are many, but we soon discover Dallas has a dark history for our protagonist, unearthing memories she thought she had buried long ago.

New York to Dallas moves along quickly and smoothly, building suspense and foreshadowing impending doom as it goes. Just when I thought I would put the book down at the end of a chapter, the author plants a seed of suspense that compelled me to read on. J. D. Robb is at the peak of her powers as a writer—truly masterful. Her descriptions of the abductions and violations of the youngsters is revolting without being graphic, a skillful use of the language that is far more powerful than a vivid account of each event.

J. D. Robb’s In Death series is obviously a hit with her fans. She’s discovered a theme that works over and over again. New York to Dallas is a journey you won’t want to miss—it’s a trip you’ll never forget.