The New Rules for Blondes: Highlights from a Fair-Haired Life 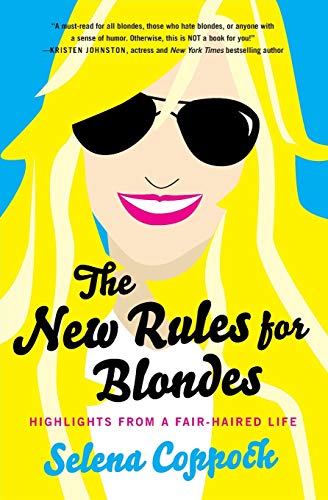 The message in Selena Coppock’s debut, The New Rules for Blondes, is simple: smart women should strive to be blondes . . . with hair a shade so bright that it will be “close to yellow.”

Why? Because blondes are “outspoken, fun, and opinionated . . . more funky, spunky, and playful” than women with darker or red hair.

Early on, Ms. Coppock differentiates a pale blonde from a bright blonde. She calls these blonde shades “ashy” and “brassy.” The Know Thyself chapter illustrates the difference with over two pages of questions on charts, but in the end she notes that there’s a bit of both in everyone.

“Most blondes are a bit brassy and a bit ashy simultaneously, and that combination makes for a good shade with depth and dimension. There’s a little bit of ashiness and a little bit of brassiness in each of us and we can call on either of these sides when the situation is appropriate.”

According to the author, these 16 comparisons will immediately send the reader out to find a colorist. (Ms. Coppock says that a woman’s colorist is a blonde’s best friend—far more important than men or love.)

Such a move will enable the brassy blonde to live well—“well” in Ms. Coppock’s view seems to be to have raucous extravagant fun, to be the object of envy, and to collect blonde friends to develop a “blondetourage.”

The reader might sense a bit of bullying. Such a blondetourage is necessary because woman with darker hair are probably jealous. Blondes must befriend only each other . . . and men.

The book chapter titles and also the book’s title frequently mislead the reader, especially those that mention “rules.” Importantly, there is no distinction between old rules and new rules.

Several chapters are biographical—anecdotes of Ms. Coppock’s misadventures; others seem to be lists, e.g. five chapters alone on Blonde Maintenance or Crank Up the Pro-Blonde Anthems. In the Anthem chapter, Ms. Coppock lists popular songs that mention blondes because music is one of the author’s passions.

A few from the list: Bon Jovi’s “Bed of Roses.” In this beautiful ballad, JBJ sings, “Some blonde gave me nightmares. I think that she’s still in my bed.” Ms. Coppock’s comment, “Hell yeah, blonde shout-out and a song about blondes getting laid!”

Also on the list:
“Anything by Madonna. Nobody is more of balls-out, brassy, no-bullshit blonde than the Detroit native with a British accent, Madonna Louise Ciccone, a.k.a. Madonna. . . .”

The author’s persona is a wild comedian driving without a seatbelt or ethics, yet she has some of a writer’s talents: careful word choice and timing, as if she’s just putting on airs as a stand up comedian on the page. While she certainly makes her case, often her point is repetitive. She loves and uses tough gutter vocabulary, choosing words of force, including profanity, obscenity, expletives, her own slang, and original combinations of all of these.

Ms. Coppock uses a range of literary devices that stretch poetic license, some times too far. Such word play often heightens an already ribald passage; other times it is alliteration just for fun. Writing in the first person, she is hell bent on her passions: her looks, her choices in life, and especially her nearly yellow hair. She craves the attention of others yet often mocks her admirers.

Another chapter with a misleading title: Channel Blonde Wisdom. (Is that a rule?) offers:

“This chapter is a useful gathering of million-dollar words that you can drop in conversation when necessary. If you should find yourself trapped in conversation at a cocktail party of dinner gathering with a smarmy jerk who is being patronizing and you can tell that he thinks that you’re just another ditzy blonde, drop one of these bad boys and watch what happens. I can guarantee that the know-it-all’s entire world will be turned upside down by the mere suggestion that you might be even remotely intelligent.”

In the Wisdom chapter, she suggests two choices: playing dumb at a gathering or playing cerebral by using a memorized list of “important” words to throw into conversation, thus impressing others with her brilliance while laughing at them all the time. What follows is a list of suggested words—and Ms. Coppock’s funny translations.

Rather than explaining new rules for blondes as the title suggests, the book might as well be called a collection of stand up a performances tied together. The question, “What about old blondes?” is never answered.

Ms. Coppock shoots opinions at her readers with an in-your-face attitude just like a brassy woman, blonde or not. Her voice may lead readers to suspect that she doesn’t give a hoot what readers think of her.

In spite of much vulgar comedy (e. g. a lengthy, detailed account of her having diarrhea), The New Rules for Blondes will be funny to readers who like raunchy blue humor or, in Ms. Coppock’s case, humor that is screaming yellow, brassy, and very very blonde.