The New Goliaths: How Corporations Use Software to Dominate Industries, Kill Innovation, and Undermine Regulation 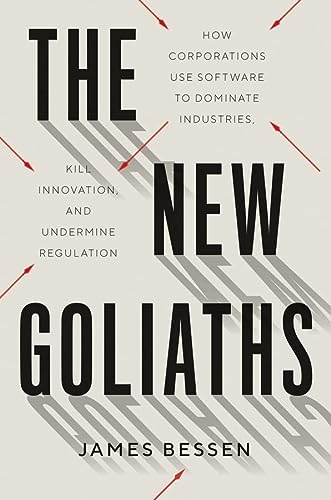 “Besson’s analysis of the role of information technology in the new economy is an interesting one and worth reading.”

The last two decades have been anything but normal for the U.S. economy. America has suffered two catastrophic recessions, income inequality has grown while wage productivity growth has slowed, and U.S. manufacturing has been hollowed out.

In response, a host of books have sought to make sense of all of this. And many seek a “unified field theory” with a simple explanation to explain what has gone wrong. These explanations include economic monopoly, Wall Street capitalism, corporate greed, intrusive big government, Chinese economic predation, globalization, protectionism, technology exhaustion, technology speed-up, political and social conflict, and even racism.

The idea is to offer one overarching, all-encompassing theory that explains all. This may help sell books, but it is usually a poor substitute for needed complex, multi-factor analysis.

Adding to this body of work comes James Bessen’s The New Goliaths. In case the title is too subtle for you, Bessen is arguing that most U.S. political-economy challenges, including slow economic growth, declining entrepreneurial activity, increased inequality, and increased economic concentration, have a single cause: the use of proprietary software enabling a few “superstar” firms in various industries to become dominant.

Bessen, the director of the Technology and Policy Research Initiative at Boston University School of Law, has produced insightful work in the past, including how technology has changed banking and the role of “learning by doing” in organizations. In contrast, Goliaths, while containing many interesting insights, reaches too far and tries to explain too much, resting on a narrow reed of explanation.

To his credit, Bessen doesn’t embrace the explanation that increased economic concentration is due to weak antitrust enforcement over the last half century as the more free-market “Chicago School” of antitrust has supposedly prevailed in U.S. policy. Many “neo-Brandeisian” progressives subscribe to this “big is bad” notion and believe that if government would only adopt an aggressive federal antitrust regime, most of our economic problems would be solved.

Nor does he subscribe to the often-popular view that the problem stems from “big tech” platforms. In fact, Bessen argues that Congress’s “focus on platform business is misdirected . . . and their remedies may actually be detrimental.” Indeed, tech platforms, such as Amazon, “may actually increase competition” in large part because of their introduction of their own private label products that compete with established firms and products.

But while Bessen doesn’t blame government lack of action against “monopolies” he does blame technology. For him, the cause of the problem—too many large, dominant firms—comes from the nature of new information technology (IT) systems such as cloud computing, artificial intelligence, and other complex software and database systems. He argues that once a firm is able to gain a marketplace advantage by developing and using IT systems they become “superstars” that can almost never be challenged.

Bessen writes that “These new [Information technology] systems enable firms to . . . offer dramatically more variety, more features, or more product versions.” He also notes that these firms are more productive than other firms and pay their workers, including unskilled workers like janitors, more than other firms. And that these firms spur more capital investment than would otherwise be the case. Indeed, these firms “often had to change their organizations and make deep investments in the capabilities of their employees.” This all sounds good.

Bessen isn’t arguing that these superstar firms gained market share unfairly through anti-competitive conduct, something that U.S. antitrust enforcers would have prosecuted if the firms had engaged in that. Rather, he’s saying that these leading companies figured out on their own how to combine skills, business strategy, and great IT systems to giving consumers what they want and thereby win in the marketplace. He singles out a few firms as examples, including Amazon, Microsoft, Toyota, and Walmart. While these firms are large, they represent only a small share of the U.S. economy. Moreover, Amazon has disrupted Microsoft. Toyota has around 15 percent of the U.S. passenger vehicle market. And Microsoft lost to Google and other companies in key areas like Internet search.

Rather than celebrate these “superstars,” Bessen complains that their success has made it harder for other firms, especially new firms, to enter and gain market share. But if these new firms “build a better mousetrap” certainly consumers would want to buy it, and they would gain market share. Bessen is just pessimistic about these firms’ ability to do that.

This gets to what I believe is his biggest issue. In the 1970s Harvard economic historian Alfred Chandler wrote several classic books on the late 19th and early 20th century U.S. industrial revolution and the rise of large industrial, managerial corporation: firms like DuPont, General Motors, and General Electric. Chandler rightly pointed out that these firms appeared not because of some deficit in U.S. antitrust law but because of the nature of technology had changed that made success dependent on size and scale.

The Chandlerian revolution was largely, but not exclusively, confined to manufacturing where physical machines enabled mass production. In the last two decades information technology has played a similar process in a host of non-manufacturing industries, such as banking and insurance, retail, information, and logistics. It has enabled organizations to use sophisticated IT systems to gain scale, enable greater customization, and boost quality. Rather than see rising scale from IT (efficiencies and network effects) beneficial, Bessen sees them as problematic.

This stems in part from a romanticization of small businesses as good in and of themselves. Bessen writes that the rise of chain retail stores was “devastating to small independents.” That may have been true, but so what? The goal of a market-based system is not to protect one class of business, it is to enable greater consumer and worker welfare, something the large chains did vastly better than the small independents.

Bessen also complains that these complex, expensive software systems act as barriers to entry: “The large investment required to build the top-quality product is a key obstacle to rivals, and it plays a prominent role in shaping industry structure.” But this is not new and has long been the case since the rise of mass production corporations. Once GM, Ford, and Chrysler became the “big three” there was virtually no entry until Japanese and German automotive firms entered the U.S. market in the 1970s and ’80s. It was virtually impossible for firms to enter because the knowledge and capital requirements were simply too large. Tesla was able to enter only more recently because it was based on a fundamentally different set of technologies that the incumbents had less experience in.

He also asserts that these superstar firms have been a key cause of the rise of income inequality, pointing to evidence such as the fact that superstars pay their workers more than non-superstars, including paying less skilled workers about 20 percent more than other firms. Most people would see the fact that these firms are paying less skilled workers more a good thing. Besides, the principal cause of the growth of inequality is not that some janitors or secretaries are making a bit more, but because too many like hedge fund managers and sports stars are making so much.

Bessen tries hard to force evidence to fit his unified field theory, but it sometimes doesn’t fit. Most problematic is his assertion that economic concentration (monopoly) has gone up in America. If economic concentration has not gone up, then his entire theory about software enabling superstars starts to wobble.

He cites a number of studies that rely on very broad industry categories (such as food products) rather than studies that studies examining changes in industry concentration at more fine-grained level (such as tortilla manufacturing). These studies have found that there has been virtually no increased in economic concentration between 2002 and 2017 (the latest year of available data from the government).

Likewise, Bessen relies on a faulty and discredited study that claims to find monopoly has increased because company price markups have gone up. But this study has been roundly criticized for not accurately measuring changes in cost structure, particularly the rise of intangibles spending (e.g., spending on research and development, advertising, etc.).

According to Bessen’s theory these superstars hold back change, including reducing the number of firms that go out of business, what is called disruption. For him this “represents a fundamental change in the nature of capitalist competition.” Yet, according to the data he presents, disruption rates in the last decade were about the same as they were in the 1970s.

In Bessen’s model, firms are able to stay dominant because they are able to better prevent key technology, trade secrets, and capabilities from being shared with would-be competitors. Indeed, he asserts that the process of knowledge and technology diffusion is weaker today. That may be because unlike a machine that might be able to be reengineered, today it is easier to keep software code private. But this is not to say that companies do not know what their competitors are doing. Leading-edge companies are regularly covered in trade publications and their executives speak at industry conferences. Every major retailer, for example, knows how Walmart’s IT systems work. It’s just that it is not always easy for competitors to build similar capabilities.

In addition, while Bessen argues, rightly, that IT systems give firms a competitive advantage—for example, Walmart’s sophisticated computerized inventory system helps it cut costs and keep items in stock—the reality is that that most companies today use off-the-shelf IT systems, built on platforms, not only from large companies like Microsoft, Oracle, and SAP, but from hundreds of smaller vendors selling software packages specialized by function (e.g., HR) or industry (e.g., law). Any company can buy these technology services to build a great company. The real issue is if the company can build and execute and viable business model

When it comes to solutions, some of the book’s make sense. For example, he rightly advocates federal rules to require what are termed open APIs in sectors like banking that would require banks to make their IT systems open so that customers can easily access their own data and port it over to other firms automatically.

But he would go beyond this. He notes that “consumers would be better off if more retailers had Walmart’s logistics, inventory, and shipping capabilities so that they too, could offer greater selection, faster response to changes in demand and lower costs.” And to encourage that he would have the government weaken intellectual property laws and even force superstar companies to share their IT systems with competitors. But this would likely hurt economic growth and innovation as they would reduce the incentives for companies to invest in complicated, complex systems. Why spend all that money and change management practices if you have to share that with your competitors so you get no comparative advantage?

Unified field theories may work in physics, but they generally don’t work in economics and politics. Nonetheless, Besson’s analysis of the role of information technology in the new economy is an interesting one and worth reading.