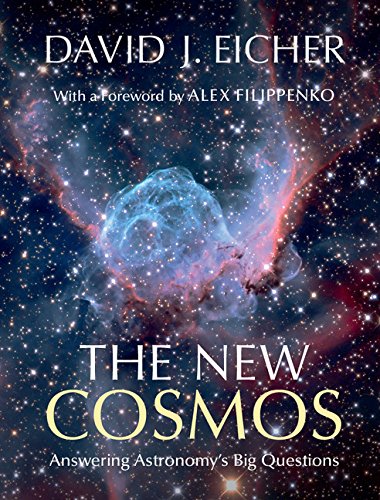 This fantastic book owes a great debt to Carl Sagan’s original Cosmos series and bestselling book. Author David Eicher, editor-in-chief of Astronomy magazine, brings his knowledge to bear on this volume in which current knowledge is summarized and exploration is continued.

Eicher situates the reader among the leading questions of astronomy with clear explications of why the questions are being asked and how they are being explored. It would have been nice, however, if the author had offered cultural context as well, such as how and why these questions are important to science as well as to the individual.

The New Cosmos begins with a chapter on the basics of astronomy—the founding fathers and their discoveries—as well as the early questions that encouraged further exploration. Going from this to the second chapter that discusses how the sun will die is a bit bleak, followed by a chapter that discusses the end of life on Earth, and then onward to how the moon formed, and planet formation, dark matter and black holes, etc.

The layout is like a textbook with long stretches of text and the occasional photograph or figure for visual interest, or a chart to further illustrate a point. Each chapter lends itself to be reading individually or out of order because it has a solid introduction and conclusion. Students of astronomy will enjoy this reader though it is hardly a scholarly monograph. Laypeople will get the most out of this book. The narrative is simply constructed and easy to follow, and jargon is avoided while scientific terminology is explained. At the back of the book is a glossary, a bibliography, and an index. The reading level of this book is for advanced high school students and beginners dabbling in understanding astronomy and astrophysics.

The New Cosmos would’ve benefitted from a more textbook-like approach by using inset text boxes to allow for highlighting important facts or including the digressions Eicher makes, or by underscoring the words that can be found in the glossary. Also, it would have been useful to include a teacher’s guide of some sort with this book so it would lend itself to a classroom approach, where this type of book is sorely needed.

Eicher shows enthusiasm for his topic and writes directly to the reader using first-person narration. This book is more than just a collection of facts, it examines the deeper meaning behind experiments—why something was done when it was, what astronomers were trying to answer and how. Each chapter is dedicated to a specific topic—black holes, dark matter, the Milky Way, Pluto, and the meaning of life in the universe—and begins with an explanation of the importance of the topic in the sciences.

Readers who enjoy science, particularly astronomy and physics, will enjoy this lovely volume. Fans of Neil de Grasse Tyson and Bill Nye the Science Guy will want to add this book to their reading list—the information in here is among the topics that the two cover on their shows and in their media talks.